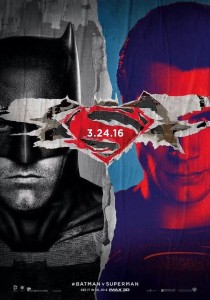 Over the past decade, Marvel has slowly built one of the most highly anticipated cinematic franchises, with each installment garnishing rave reviews and even more acclaim from fans. Through 12 movies, the Marvel Cinematic Universe has meticulously and carefully put all the pieces together, to where millions will turn out this summer and understand nearly every second of “Captain America: Civil War”. Marvel has taken a lot of time and patience to get that point. Warner Bros. and DC apparently don’t have time for that.

Set 18 months after the events of “Man of Steel”, “Batman V. Superman: Dawn of Justice” obviously introduces us to Bruce Wayne (Affleck). His backstory is ubiquitous, so we gloss over his tragic past in a quick sequence of shots and voice over narration on the opening credits. But the draw is when we watch the fight between Superman (Cavill) and General Zod (Michael Shannon) from the end of “Man of Steel”. While people flee from the chaos, Bruce runs into the clouds of debris and crumbling buildings, highlighting why he’s a superhero, even when he’s not the Dark Knight.

The scene is captivating and eerily reminiscent of 9/11, and that’s what it’s supposed to tell us about Batman’s mind set. It also seems to acknowledge many fan concerns from “Man of Steel” about the loss of life during the Superman/Zod beatdown. There’s a lot less careless disregard for civilians in “Batman V. Superman”, but that’s because much of the movie is spent building up to the fight between Batman and Superman. But that’s because it’s what people want to see, obviously. So does the build-up make sense? Kind of. Does it pay off? Sort of.

Since DC is playing catch-up, I believe it’s fair to compare “Batman V. Superman” to the “Avengers”. While Marvel clearly has room to breathe and enjoy what is has, DC appears breathless as it rushes through characters, plots, and ideas. While I did say that Batman’s origins are omnipresent, where Batman is at in his his life is a bit of a mystery. He’s in his 40’s and seemingly has a lot more downtime than previous incantations of Bruce Wayne. But rarely do we truly understand his distrust of Superman, more than we’re just supposed to go along with it. He also seems to have some skeletons in the closet we’re not being told about.

Then there’s the iconic Lex Luthor (Jesse Eisenberg). When he arrives on scene, it’s clear he’s a billionaire playboy, but there are implications that he may just be a sociopath that inherited his father’s money. It’s uncertain whether he’s a genius or someone who’s trying to make too many bizarre religious connections to Superman. His infatuation with Superman, and to some extent Batman, is also never really explained. It’s merely implied that he has some extreme personality disorders.

Because so much of the plot is rushed and skipped over, we’re left having to digest CGI spectacles, and badly worded metaphors uttered by Alfred Pennyworth, Batman’s butler (Jeremy Irons) or Lois Lane, Superman’s squeeze (Adams). There’s too much information, but also too much time spent on inconsequential scenes, like Batman’s bizarre nightmare and Superman’s heart-to-heart on a random snowy mountain with his dead Earth father. “Batman V. Superman” doesn’t feel like a stand-alone movie, more than it just feels like a really long and unnecessary teaser for a “Justice League” movie.

If that’s the case, then the “Justice League” movie better be fantastic because we’ve really had to go through a lot of trouble to get one. That’s not to say “Batman V. Superman” isn’t a decent movie with some good ideas. The casting of Affleck, as well as his performance, is enough to forgive him for “Daredevil”. His portrayal of an aging Batman, focused on his legacy, could create some interesting plot points for later DC films, if they do it right. We also get more of Superman, carried over from “Man of Steel”, as a conflicted man dealing with his powers and who he should be for the people of Earth. While some people don’t like that Superman, I find that Superman more interesting and relatable.

Then of course, there’s Wonder Woman (Gal Gadot), whose appearance was ruined by the theatrical trailers, which is really a shame because her appearance at the end isn’t a complete surprise. Despite that, the attending audience still went nuts as she hacked a few limbs off Doomsday; another character spoiled by the trailer. I do hope that Zack Snyder doesn’t use “Wonder Woman” much like he used the ladies of “Sucker Punch” or we’ll be in for more masturbatory nerd fan service with a really exciting character that’s more than just simple eye candy.

It’s hard to predict where “Batman V. Superman” will fall in the inevitable grand scheme of things. Looking in the crystal ball, there are some interesting directors and writers attached to future DC projects, such as Patty Jenkins, the director of “Monster” and James Wan director of “The Conjuring”. While Jenkins gets to handle the origins of Wonder Woman and Wan gets the handle the origins of Aquaman, it looks like Snyder will still be the man at the helm when it comes to the “Justice League” movie. If “Batman V. Superman” and “Man of Steel” are any sign, DC might want to find someone else, and fast.