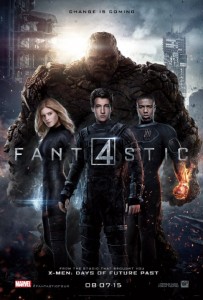 I can only imagine the board room battles over comic book property going on in Hollywood right now. It will surely make for an interesting documentary one day. While Fox will surely hold on to the lucrative “X-Men” franchise as long as possible, it might be time for them to give up the “Fantastic Four” franchise. But then again, maybe the four superheroes just aren’t meant for the big screen.

The latest offering continues a long standing tradition of bad “Fantastic Four” movies. The 2015 movie adds itself to a short list of disappointments, although this one manages to stand out. It’s definitely the bleakest and has the most talented cast of young actors. But that stellar cast was chosen because of their youth, and that’s one of the main problems. The movie starts off with Reed Richards (Teller) and Ben Grimm (Bell) becoming the best pals in 2007 before quickly flashing forward to the present day. They go from eight-year-old looking elementary school classmates to 28-year-old looking high school students.

Reed’s getting ready to show off his finished product, an interplanetary matter transporter, at a high school science fair of all places. The teachers and principal shockingly shrug off the machine that has transported an object to another world, as a mere magic trick. But luckily Reed’s machine that could potentially produce a black hole is recognized by Dr. Franklin Storm (Reg E. Cathey). He’s randomly browsing the high school science fair, accompanied by his daughter Sue (Mara), who doesn’t attend the school. It’s OK though, Storm operates a school for young aspiring scientists. So it’s completely normal that he’d be attending a tired high school movie cliché in search of another young aspiring scientist. I’m only into the first 10 minutes of this movie and I’m already frustrated with the idiocies of this movie.

Once Reed is recruited, he meets Sue’s brother, Johnny (Jordan). He’s a master technician, but a rebel, only made evident by a short scene where he drag races. Then inevitably, we meet Victor Von Doom (Toby Kebbell). Doom was actually working on an interplanetary matter transporter, called the Quantum. The government, and more specifically Dr. Storm, are investing in this idea because they want to find a solution to our Earthly woes by visiting a mystery planet.

Doom, who’s supposed to be the evil mad man, oddly enough takes a slightly sympathetic attitude about the whole project. He doesn’t believe we should discover a new planet and drain it of its resources just to save ourselves from sucking the Earth. Despite their differences in attitudes, the five youths combine their forces to create the gate, which obviously becomes a success. But frustrated with the fact they won’t be the first humans to traverse space and time, they go on an unsanctioned trip to the mystery planet, and I’m sure you know the rest. They get powers.

“Fantastic Four” is mercilessly thick with exposition without giving the viewer a reward for their investment into the plot. “Fantastic Four” glosses over loopholes, but stops to examine its duller aspects. It moves at an infuriatingly slow pace, while skipping over the possibility of some fun plot points. At times it feels like a hodgepodge of other directorial themes. It wants to be the “Dark Knight” trilogy in tone and tells poorly timed Marvel jokes without any of the charm or wit. Simply put, it’s a narrative hack job.

The action is light until the forced final battle between Dr. Doom and the Fantastic Four, but even then the fight is visually weak. “Fantastic Four” is like a small boy who spends all the time in the world setting up all the pieces for a game of Risk, but by the time he’s done, he simply throws the board across the room in a rash fit of rage. Give it up Fox. Let Marvel have the “Fantastic Four” back so they can give them a proper burial.