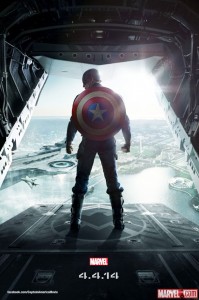 Fresh from his adventures in New York with his Avengers buddies, Steve Rogers (Evans) is still trying to adjust to his life in the 21st Century. Each day he refers to a notebook he keeps, where he writes down new information to research. A couple entries: NIRVANA (Band?) and ROCKY (Rocky 2). While jogging along the tidal pool in Washington D.C. he meets fellow soldier Sam Wilson (Anthony Mackie), who gives him another name to put in his notebook, telling him that listening to his “Trouble Man” album will give him all the answers he needs. The artist: the great Marvin Gaye.

It’s almost an understatement to say that, since his revealing to the world, the nation has fallen in love with Captain America. In fact, there is an exhibit detailing his life (so far) in the Smithsonian. Sometimes, when he’s feeling low, Steve visits the exhibit incognito, taking in the sights. And, each time, he finds himself thinking about his friend Bucky Barnes, who gave his life so many years ago. Right?

As exciting as the first film, with wall to wall action from start to finish, “Captain America: The Winter Soldier” is another perfect piece in what is becoming the most profitable super-hero puzzle of all time. Long time television directors Anthony and Joe Russo (yes, they’re brothers) have crafted an exciting tale that perfectly encompasses not only the adventure that is happing on screen but helping to foreshadow what will probably be the highest grossing film of 2015: “The Avengers: Age of Ultron.” I’m hedging my bets and saying probably because that is the same year that “Star Wars: Episode VII” is due. I wonder if I can buy a movie theatre between now and then.

This adventure finds Cap and friends taking on a new Russian villain known as the Winter Soldier (Sebastian Stan). Cap is a little taken aback because his new adversary bears a strong resemblance to someone from his past. Led by Nick Fury (Jackson) and assisted by Natasha Romanoff (Johansson) and his new friend Sam, Cap soon finds himself battling a member of his own government, the slick and weasely Alexander Pierce (a well cast Robert Redford) as well as the evil group known as HYDRA.

The filmmakers do an incredible job of keeping the action front and center and I dare say there isn’t a boring minute in the films two hour plus run time. The visual effects are outstanding and comic book fans will enjoy the various hints dropped for future films, including a very quick Doc Strange reference! A great addition to the Marvel heroes family, “Captain America: the Winter Soldier” is another testament to the powers that be at Marvel Studios that anything worth doing is worth doing well!