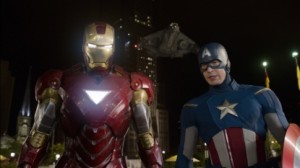 Phew! That is the sound I made at the end of “The Avengers.” After two plus hours of Iron Man, Thor, Captain America and their pals, I was able to take a breath and say to myself, “he did it…he pulled it off.” Of course, in the capable hands of Joss Whedon did I really need to worry?

The story concerns an evil plot to take over the Earth hatched by the very jealous Loki (Tom Hiddleston), brother (kind of) of Thor (Chris Hemsworth). Loki seeks an object called the Tesseract, an almost endless source of energy currently in the hands of S.H.I.E.L.D. and under the watchful eye of Nick Fury (Jackson). After infiltrating S.H.I.E.L.D. headquarters Loki steals the Tesseract, intending to turn it over to a race of beings that want to destroy earth and, seemingly, put Loki in charge. After learning that one of his best men has turned on him, Fury summons a little help. Avengers assemble!

A roller coaster ride of non-stop action, “The Avengers” manages to take the different tones set by the previous films and fashion them into one strong voice. Each character remains true to him/her self, clashing with the others at first but eventually finding a common goal to unite.

My biggest fear for the film was that some of the actors would just walk through their roles, hoping to get lost in the crowd. But instead they deliver strong performances across the board as if they were worried they WOULD get lost in the crowd. Downey sets the tone perfectly as Tony Stark/Iron Man. His sarcastic style is still around (he refers to Thor as “Point Break”), but behind that self assuredness lies a man who longs for more than a flashy suit. The other characters are involved in their own things. Besides Iron Man and Thor, we meet Captain America (Evans), Hawkeye (Jeremy Renner), Black Widow (Scarlett Johansson) and Dr. David Banner (Mark Ruffalo), who has a habit of getting angry and becoming the Hulk. Each maintains the characters they brought to life in previous films, with the exception of Ruffalo. Taking over from Eric Bana and Edward Norton, Ruffalo gives Banner just the right amount of humanity needed to make us care about him. Sure, we want to see him get big and green, but we also know the toll it’s going to take.

The on screen battles are well choreographed and, though they sometimes seem to go on forever, manage to build in excitement. The script, by Whedon and Zak Penn, is clever and full of comments that seem to have been lifted directly from the comic pages. The 3D effects were well rendered and, more importantly, well utilized. And, like in other films, there are a few surprises left over for after the credits.