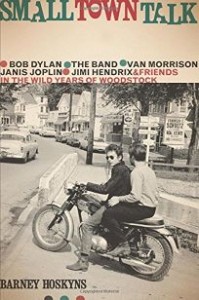 In the 1960’s when musicians in the New York City folk scene decided to “get it together in the country,” they headed to Woodstock. There manager Alan Grossman established his personal fiefdom of studios and restaurants where the likes of Bob Dylan, Paul Butterfield and Todd Rundgren mixed and mingled with Jimi Hendrix and Janis Joplin. “Small Town Talk” tells Woodstock’s story from its earliest days as a bohemian arts colony to its ongoing life as a cultural satellite of New York City.

Author Barney Hoskyns delves deep into a period of time when some of the period’s biggest singer/songwriters were leaving the crowded cities for the peaceful wooded areas which lay waiting just a few hours away. Tons of great stories are heard here for the first time as the book evolves just as the scene in the Catskills did. As you read page after page you never know who you are going to bump into from that time period which was something I found kept me looking forward to that next page. Hoskyns doesn’t only include just the big players of the time but does a great job of incorporating the community that this scene engulfed and how that era shaped what the town became and how it still remains to this day. “Small Town Talk” is simply not just a book for fans of the 60’s or its accompanying soundtrack as it has a little something for everyone. Woodstock was and is more than just a mud filled 3 day music fest and Barney Hoskyns latest book proves that.