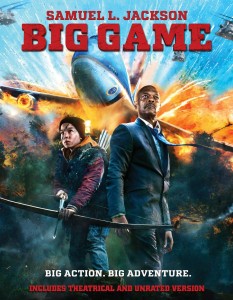 Samuel L. Jackson playing the President of the United States?! Sounds like a winner! “Big Game” is a fun film but it is also a very simple film. It is a straightforward tribute to 80s/90s adventure movies. It is definitely predictable and the a bit generic but at the same time it is fun due to its simplicity. Other than Jackson, the film posts an impressive cast including Onni Tommila (Rare Exports: A Christmas Tale), Ray Stevenson (Insurgent, Starz’ “Black Sails”), Victor Garber (Argo, Starz’ “Power”), Ted Levine (Shutter Island, American Gangster), Felicity Huffman (Cake, Transamerica) and Jim Broadbent (Cloud Atlas). All together this makes this film worth checking out as a rental.

Official Premise: In the rugged countryside of Finland, a young thirteen-year-old (Onni Tommila) embarks on a traditional quest to prove himself by spending twenty-four hours alone in the wild, armed with only a bow and arrow. After witnessing a spectacular crash, he discovers the escape pod from Air Force One, containing the President of the United States (Samuel L. Jackson). When they realize a group of kidnappers is hot on their trail with the intention of taking the president, this unlikely duo must escape their hunters as they search for the American Special Forces team sent out to find them.

The Blu-ray itself both looks and sounds great. The 1080p transfer really highlights all the films beautiful shooting locations and action scenes. The DTS-HD Master Audio 5.1 track also works well with the big scope of the film. The only “special feature” included is an unrated cut of the film (not really a special feature though). The PG-13 cut runs just over 86 minutes while the unrated version runs about 90 minutes, so there is a little more there but nothing life changing plus the unrated cut features only a Dolby Digital 2.0 audio track, so it is definitely not the ideal way to view the film.