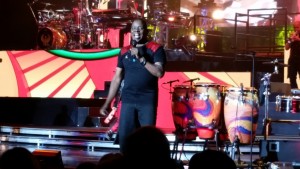 They were two of the most popular bands of the 1970s and 80s, blessed with great writing, vocals and the two best horn sections of any act EVER! On Friday night, the Elements and the group from the Windy City got together and put on a show I hope to remember for the rest of my life.

Like other shows I’ve attended (Hall and Oates/Michael McDonald/Average White Band, REO Speedwagon and STYX), the show promised to be special because not only would you get to listen to the bands individually, there was also a great jam session with both groups on stage together.

The evening was kicked off with both bands on stage performing a few Chicago songs. After a rousing performance of “Dialogue Part I and II,” Chicago vacated the stage and Earth, Wind and Fire took command of the evening. Lead singer Phillip Bailey and company brought the crowd to their feet with “Boogie Wonderland.” Even at age 64, Bailey’s sweet voice carried the evening. Along with original group members bassist Verdine White, whose brother Maurice shared the bands vocal duties until forced to retire in 1994 for health reasons, and percussionist/vocalist Ralph Johnson, the band went on an extended jam 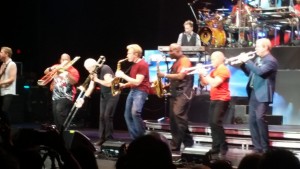 session on “Serpentine Fire,” led by Verdine White’s heavy bass lines. This had anyone who wasn’t standing already up and dancing in the aisles. Other classics covered in the set included “That’s the Way of the World,”Let’s Groove,” and the groups contribution to the “Sgt Pepper’s Lonely Hearts Club Band” film, a peppy “Got to Get You Into My Life.”

After a short intermission it was Chicago’s turn to take the stage, featuring original members Robert Lamm on keyboards and vocals and the amazing horn section of Lee Loughnane, James Pankow and Walter Parazaider. Playing favorites like “Make Me Smile,” “Just You and Me,” and “Saturday in the Park,” the band was spot on the entire evening. In fact, the only time the audience took a break and sat down was during “Colour My World” which, as I recall, was the first song I ever slow-danced to! It was also great when the band segued into “Get Away” after finishing “Hard to Say I’m Sorry.” The song always fades out when you hear it on the radio but on the album (I’m going to take a guess and say “Chicago 16”) it picks up nicely and gives the song a fun ending.

But the best was yet to come when, at show’s end, Earth, Wind and Fire returned to the stage and the two groups turned the energy up to “11.” Familiar hits, from “September” to “25 or 6 to 4” were performed with the power of not one, but two horn sections. I can only imagine that this is how heaven sounds! After three and a half hours the bands said goodnight to an 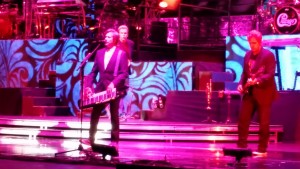 adoring crowd who gave them a much deserved ovation.

The “Heart and Soul” tour, featuring Earth, Wind and Fire and Chicago, continues through September 6. If they’re coming your way make plans to see them. I promise you won’t be disappointed.

SET LIST: (Both groups) Beginnings, In the Stone, Dialogue (Part I & II), (Earth, Wind and Fire) Boogie Wonderland, Jupiter, Yearnin’ Learnin’, Serpentine Fire, Devotion, That’s the Way of the World, After the Love Has Gone, Got to Get You into My Life, Fantasy, Let’s Groove, (Chicago) Introduction, Questions 67 & 68, Make Me Smile, So Much to Say, So Much to Give, Anxiety’s Moment, West Virginia Fantasies, Colour My World, To Be Free, Now More Than Ever, Call on Me, Hard Habit to Break, You’re the Inspiration, I’m a Man, Street Player, Just You ‘n’ Me, Hard to Say I’m Sorry/Get Away, Saturday in the Park, Feelin’ Stronger Every Day, (Both groups) September, Free, Sing a Song, Does Anybody Really Know What Time It Is?, Shining Star, 25 or 6 to 4.

Here are the remaining shows on this leg of the Heart and Soul tour. For tickets click here.

Filed Under: Concert Reviews Tagged With: