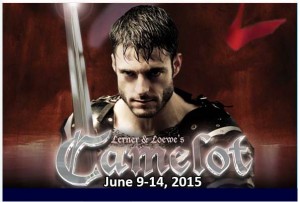 Of all the “classic” Broadway musicals I’ve wanted to see, none ranked up as high on the list as “Camelot.” I don’t know if it was because my mom always played the album (she LOVED Robert Goulet) or if it was because I knew that it had been President John F. Kennedy’s favorite show. Coincidentally, Kennedy had been a classmate at Harvard with the show’s author and lyricist, Alan Jay Lerner. And while I’m not going to rave about this production, I’m glad I saw it.

The show opens with King Arthur (Adam Grabau) chatting with his friend and mentor, Merlin (Mark Poppleton). Arthur is about to wed, sight unseen, the Lady Guenevere (Mary McNulty) in an effort to bring peace to the kingdom. They meet cute and both are happy to learn that the other is quite attractive. The marriage goes well but Merlin is lured away. Five years later Arthur has decided to let more than sword fights and battles rule the kingdom. Convinced that things can be worked out with words, he invites other Knights to sit with him at his Round Table. Among those Knights is the French Lancelot Dulac. While his boastful tone upsets some, Arthur finds it refreshing. And after Lancelot bests Arthur’s three best Knights, even bringing one back from the dead after killing him, Arthur is convinced that Lancelot is his champion. Guenevere also sees something in Lancelot. Awkward!

Well presented, though if the press information is to be believed, quite scaled down for the “Game of Thrones” set, this production of “Camelot” posts three great leads and an incredible selection of music. It also features a scaled down (5-piece) orchestra (I think Munch’s Make Believe Band at Chuck E. Cheese has more members) which was sometimes very hard to her over the strong vocals. The three leads do well both in character and in song. Poppleton turns up again as King Pellinore and gives the show some much needed comic moments. In the second act we meet Mordred (Kasidy Devlin), foretold by Merlin as someone Arthur should distance himself from. Unfortunately he is more annoying than evil. If the Knights of the Round Table were the Sweathogs, Mordred would be Arnold Horshack.

This is the final stop of the current tour but if it picks up again later this year you should give it a look if you can.

“Camelot” runs at Starlight through this Sunday, June 14.