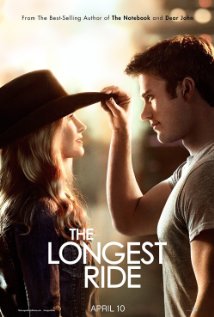 The mere mention of Nicholas Sparks when heading to the theater will make any guy consider cancelling his date night or drive off the nearest overpass. Luckily for me. I have never actually watched a movie based off a Nicholas Sparks book. I guess I’ve been fortunate, but I’ve heard the horror stories. Generally my male counterparts recount the tales of being dragged by their significant other to the movies to watch them like war veterans recount a bloody dog fight in a foreign country. Well I’ve come back from battle and I’m here to tell you my tale.

“The Longest Ride” could be broken down into two stories. One is a legitimate love story that I actually wouldn’t have minded following and the other is simply, wishful thinking. Let’s go over the abysmal second story that has given me the most war scars. Luke (Eastwood) is a good old fashioned country boy dingleberry. He’s good hearted, but thick headed. He nearly dies while bull riding, but despite the doctors warnings, his mother’s wishes, and a handful of people shaking their head, he continues participating in the “sport”. His caution to the wind attitude towards death because he simply wants to spend eight second riding a creature that has just a few less brain cells than him has earned him the nickname Dingleberry for the rest of this review.

Painfully wooing this rugged Southern charmer, is Sophia (Robertson). She has a promising future; she’s very creative and level-headed, but once again, thick headed to the obvious. Against her best judgement, she’s dragged to a professional bull riding event by her sorority sisters who simply want an excuse to drink commercial beer and hopefully hook up with one of the cowboys. The phrase, “I want a cowboy,” is uttered so much, you’ll wish the ticket taker had given you a doggie bag to vomit in.

So why do these two different people become smitten with each other? The heuristic process of deduction would conclude that it’s simply because they’re both physically attractive to one another. Their “deep” conversations in which they bond on an intellectual and emotional level mainly consist about their favorite comfort food. The chemistry between them, as well as our actors portraying them, is non-existent. Unless giggling, remarks about each other naked and lots of staring each other up and down is considered a form of meaningful bonding in Sparks stories.

The other story that enters the fray, luckily, is the one surrounding Ira (Alda). He’s rescued by our two nitwits after his car goes off the road. In his concussed state, he asks Sophia to grab a box from his vehicle. Because she’s just a nosy young adult, she snoops through it and finds stacks of letters written to Ruth, the love of Ira’s life. Their relationship is the stereotypical love at first sight, but their relationship and love has never been easy. Each makes personal sacrifice after personal sacrifice to keep their enduring love going. This story is there to help create this idea that if Ira and Ruth can work even though they were completely different, so should Sophia and Dingleberry. That’s just not the case at all.

What makes Ira and Ruth’s relationship believable is that they both want the same things, but the challenges that life throws at them individually is what causes them to falter, but they continuously refocus on the rewards of their marriage. As for Sophia and Dingleberry, they’re just not meant for each other. Sophia is ambitious, caring and has a career that can fulfill her wild fantasies. Dingleberry, on the other hand, is obsessed with rising to the top in a sport that could kill him and harbors the secret that his doctors have told him to stop from Sophia. Dingleberry is just pompous and selfish. There are no sacrifices on his end. He simply smiles and caresses Sophia hoping that his good looks will simply whitewash the fact he’s a bumbling Neanderthal.

“The Longest Ride” is the most painfully long romance movies I’ve seen. While the themes and ideas behind what Ira speaks ring true, they don’t ring true for the predicament in which Dingleberry is involved. Maybe Sparks should have just cut out the one good story and let it be a standalone. So. That’s my war story. I’ve done my time. Now heed my warning. You’re better driving off the overpass on your way to the theater.