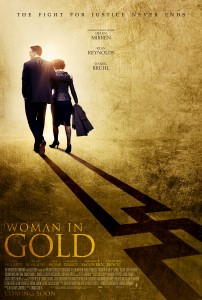 It’s amazing the things you never know, even when you know some things. As someone with a vague interest in art, I was familiar with the famous painting referred to as “Woman in Gold” (actual title – “Portrait of Adele Bloch-Bauer 1”) painted by Gustav Klimt. What I found amazing about the painting is that the artist not only used oil paints, but actually used thin pieces of actual gold. But it’s the story that takes place after the painting is completed that makes up the well-crafted “Woman in Gold.”

The film, through flashbacks and the periods’ modern day, tells the story of Maria Altman, an Austrian girl who is forced to leave her home country as the Nazi’s come to power. Maria has a favorite aunt, Adele (Antje Traue), who dotes on her constantly. Maria loves her and loves admiring the painting of her, which hangs in their home. We also meet modern-day Maria (Mirren, in a performance that should be remembered come Oscar time). Maria is hoping to have the painting returned to her. It currently hangs in the Austrian State Gallery, having resided there since it was stolen by the Nazi’s in the 1940’s. When the country’s Minister of Arts refuses to return it, Maria asks the attorney son of a friend of hers (Reynolds) to help her. The rest, as they say, is history.

Sharply directed by Simon Curtis, the film is an intriguing mystery as, little by little, more and more information comes across the viewer’s desk. As we watch Maria (both of them) we learn what events made them the woman they are. We learn of the injustices felt not only by Maria but by the family she left behind. We also learn of her plight in the United States. With her attorney’s help, Maria finds a way to sue the Austrian government in the hopes of righting a 60 year wrong. Mirren is at the top of her game here, making you understand with only a few words or gestures the horrors Maria felt about those times and still feels today. The only drawback of the film is Reynolds, who is almost TOO subdued in his portrayal. But don’t let that opinion detract you from seeing it. The story the film tells is too important to miss.