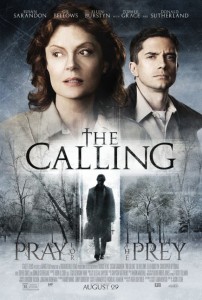 Every morning, Chief Inspector Hazel Micallef rises from the floor (her preferred place to sleep), takes a pain pill and a shot and heads to work, only stopping on the way at the local diner, where the owner waits for her with a cup of coffee and a bacon sandwich. Things are pretty slow in Fort Dundas, a city in the Canadian province of Ontario. Though not officially the top cop, her seniority makes her the one giving orders to her fellow detective, Ray Green (Bellows) and they local cops. On one of the typically slow days that seem to run back to back to back in town, the station gets a phone call from one of the townspeople, currently out of town, who has had trouble reaching his mother on the phone. Can someone please stop by and look in on her? Hazel takes it up herself to run the errand. When she knocks and gets no answer she walks in. And what she finds will ensure that the slow days at the Fort Dundas police department are coming to an end.

A well-paced thriller that will have you guessing until the end, “The Calling” comes to us courtesy of first time feature director Jason Stone. With a few short films under his belt, Stone has managed to attract a cast featuring two previous Oscar winners as well as such well-known talent like Topher Grace, Gil Bellows and Donald Sutherland. Stone, whose short film “Jay and Seth Versus the Apocalypse” was the basis for last year’s all-star comedy, “This Is the End,” shows a veteran’s touch in handling his actors. He allows them some room to explore their scenes but still keeps them tight. As the film progresses, there really isn’t a false step in the pacing. I’m looking forward to his sophomore feature.

Sarandon, still not looking anywhere near her 68 years, gives a nuanced performance, never giving anything away. As the film progresses we learn why Hazel isn’t officially the boss as well as why her superiors are slow to put any faith in her claim that a serial killer may now be operating in the Great White North. Supporting work by Bellows (who you may recognize as Tommy, the young boy who Andy befriends in “The Shawshank Redemption”), Sutherland and Burstyn, as a former judge and Hazel’s mother is outstanding. Burstyn is only 14 years older than Sarandon and she, too, still maintains the beauty that first burst upon Hollywood in the 1970s. And special recognition to Grace, who plays a cop recently transferred to Fort Dundas from Toronto. Why? You’ll have to watch the film to find out.

“The Calling” is currently available on Video on Demand and opens in theatres on Friday, August 29th.