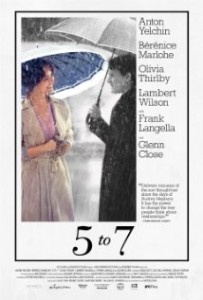 Meet Brian (Yelchin). A struggling young author living in New York, he spends many of his waking hours walking in Central Park and observing the various dedications placed by loved ones on the many benches that fill the park. Though he is alone, he can’t help but muse that, when you are out in public, you are always “20 feet from someone you know or want to know.” One day Brian meets someone he most definitely wants to know. And that introduction changes everything.

Cleverly acted by a cast that truly believes in the material, “5 to 7” is a true May-December romance with a twist. The person Brian meets, the lovely Arielle (Marlohe), can only see Brian between the hours of 5 and 7 nightly. Brian soon learns that Arielle is married (her husband is a French diplomat). He’s very surprised to learn that hubby is fine with Arielle seeing Brian, especially since he has his own “friend,” ironically a publishing editor. Even more surprising is that the four of them hit it off like old friends whenever they’re together. Ooh-la-la!

Best known for his role in the current “Star Trek” films, Yelchin is very genuine as a young, sometimes naïve man making his way in the world. Marlohe is equally good as the older, more secure Arielle. Veterans Frank Langella and Glenn Close show up as Brian’s parents and give the film a nice shot of humor. Director Levin, who also wrote the script, allows his cameras to capture the sights of the city, which sets the moods of the film. Though the film runs just over an hour and a half, to me it felt like it should have ended 10 minutes before it did. Still, that being said, “5 to 7” is a small romance that deserves your time.