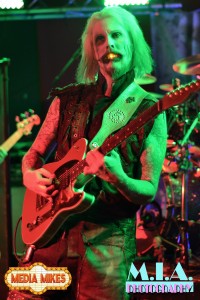 Guitarist extraordinaire John 5 slid into the frozen tundra of Rochester, NY on March 7th to perform at the intimate Montage Music Hall. John is currently out on his first ever solo tour which coincides with his latest solo release titled “Careful with That Axe”. Though the crowd wasn’t quite sure what to expect from the guitarist who has worked with everyone from Kd Lang and David Lee Roth to Marilyn Manson and Rob Zombie all were quickly wiped away.

The trio who along with John 5 includes bassist Ian Ross and drummer Roger Carter hit the stage basked in rays of red and green light before instantly launching in to the song “Flight of the Vulcan Kelly”. As the set progressed through songs like “Sin”, Jiffy Jam” and “Six Hundred and Sixty Six” 5 and company seemingly became more comfortable with the Rochester crowd and paused briefly to thank them for their support before 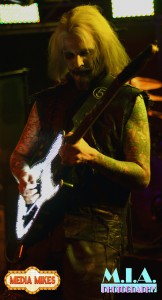 Though this may be John’s first tour as a solo artist he’s certainly no stranger to the stage as his 20 plus years of experience in music certainly showed as he worked the audience like a true veteran of the stage. He often signaled for crowd response or sending his guitar into the audience for them to play. Later on in the set he even brought up a fan play his guitar while he passed out high fives to those in the front row. If John 5 and the Creatures are making their way to your time in the coming month or two definitely make it a priority to get to the show as you won’t be disappointed. For those looking for something a little extra out of the night John is offering special VIP packages through www.John-5.com where you can attend sound check, meet the band along with getting some other really cool limited edition swag.