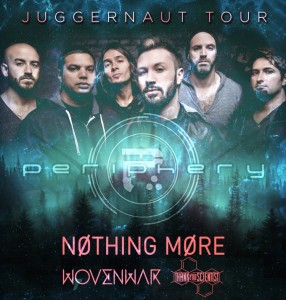 The progressive metal band Periphery slid into the Water Street Music Hall in Rochester, NY on February 9th to play one of the last shows of the groups 2015 winter “Juggernaut Tour”. The 6 piece group from Bethesda, MA is out in support of their latest albums “Juggernaut: Alpha” and “Juggernaut: Omega”. Also on the bill for the snow filled evening was Texas natives Nothing More, Wovenwar and Thank You Scientists. Even though mother nature reaped havoc on Upstate, NY the near 12 inches of snow did not stop 3 of the 4 bands on the bill from giving their all to those who braved the treacherous travel conditions.

Horrible weather didn’t stop 3 of the 4 bands on Periphery’s Juggernaut Tour from bringing each of their unique and progressive sounds to those who slipped and slid through the venue doors. Though Thank You Scientist were unable to perform due to a break down the 3 remaining acts on the bill put their best snow covered feet forward. The former members of As I Lay Dying would take the stage first with their new band Wovenwar. The melodic metal band which features Oh, Sleeper vocalist Shane Blay shredded through a brief 6 song set which showcased songs from the groups self titled debut album. The always spot on guitar duo of Nick Hipa and Phil Sgrosso were in top form as were the other member’s performances. Though the band took little time to interact with the intimate sized crowd they let their music do all the talking which resulted in tremendous praise from the audience. Nothing More would take the stage next flanked by an array of drums held up by ornate stands which factored heavily into the bands visual presentation. Despite the band showcasing a variety of talents including a 3 person bass solo and tandem drumming I found these occurrences to be the only real highlight of the bands 10 song set. After a brief set change the members of Periphery would hit the stage running with the song “Icarus Live!” which gave way to fan favorites like ”Make Total Destroy” and “Ragnarok” while also giving fans a taste of some of the songs off both new albums. At times the bands down tuned dinge seemed to over shadow Spencer Sotelo’s vocal performance but that aside the bands performance otherwise flawless.

Despite weather putting a huge damper on the evening’s attendance the 3 bands that performed demonstrated nothing but sheer professionalism. There is no doubt in my mind fans who came out this evening enjoyed the show. Bands with less professionalism would have simply thrown in the towel and bowed down to the weather gods but Periphery, Nothing More and Wovenwar showed their dedication to their fans and each put on noteworthy performances that will stick in the minds of each person who made it out to Water Street this night.