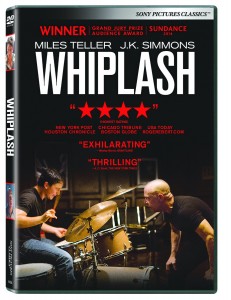 “Whiplash” is yet another film that did not get the attention and respect that it deserved when it yet theaters. It has an outstanding cast that deserves much praise. I should note that this is produced by Jason Blum, the man behind the “Paranormal Activity” and “The Purge” franchises, so this is a movie about the world of jazz music drumming is a very interesting turn. Let’s get to the cast now, Miles Teller (“The Spectacular Now”, “That Awkward Moment”, 2015’s “Fantastic Four”) is outstanding. He nails this role and really gives his all. J.K. Simmons is the stealer of the show here though, he plays the drill sergeant role ala R. Lee Ermey in “Full Metal Jacket” to the Jazz music scene. He already won a Golden Globe for this role and is nominated for the Oscar last this month. This is a must see movie for sure!

Official Premise: Andrew Neiman (Miles Teller) is an ambitious young jazz drummer, single-minded in his pursuit to rise to the top of his elite east coast music conservatory. Plagued by the failed writing career of his father, Andrew hungers day and night to become one of the greats. Terence Fletcher (J.K. Simmons), an instructor equally known for his teaching talents as for his terrifying methods, leads the top jazz ensemble in the school. Fletcher discovers Andrew and transfers the aspiring drummer into his band, forever changing the young man’s life. Andrew’s passion to achieve perfection quickly spirals into obsession, as his ruthless teacher continues to push him to the brink of both his ability—and his sanity.

We were only given a chance to review this film on DVD, which is a bit disappointing because I am sure that the sound on the Blu-ray is outstanding. Plus the DVD gets skimped on the special features as well. Exclusive feature to the Blu-ray are the original short film the movie was based on and a deleted scene, both of which include optional commentary and a 42-minute documentary featuring famous drummers who share stories and discuss their passion for the craft including Chad Smith, Peter Erskine, Gina Schock, Doane Perry and many more. The special features we get are an audio commentary track with Actor J.K. Simmons and Writer/Director Damien Chazelle. It is a nice balance of details and comedy, thanks to Simmons. There is also a feature called
“An Evening at the Toronto International Film Festival with Miles Teller, J.K. Simmons and Damien Chazelle”, which is a Q&A with the team.