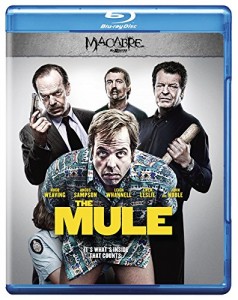 Are you a fan of the “Insidious” franchise? If so they you might recognize that “The Mule” was co-scripted by two of its stars, Angus Sampson and Leigh Whannell. Whannell is also directing the upcoming third “Insidious” feature and Sampson also co-directed this film as well. I love these guys, they are funny and they continue bringing the funny here.

“The Mule” co-stars John Noble from”Fringe” and Hugo Weaving from “The Lord of the Rings” and “The Matrix” franchises. Clever, funny but personally, I felt a little long or in this case had a bit of constipation. Still brilliant cast and based on a true story, which makes it a bit more interested.

Official Premise: A naïve man transporting lethal narcotics in his stomach is detained by the police. Alone and afraid, the mule makes a desperate choice — to defy his bodily functions and withhold the evidence…literally. By doing so becomes a human time-bomb, dragging cops, criminals. lawyers and his mother into his impossible escapade. Inspired by true events, THE MULE is a comic nightmare of stomach-churning suspense and belly laughs.

The Blu-ray itself didn’t blow me away with any technical merits. The DTS-HD Master Audio 5.1 track benefits from a fun score with an 80’s feel to it, thanks to composers Cornel Wilzcek and Mikey Young. The 1080p transfer is crisp and solid, so no major compliant there either.

In terms of special features, starting off we get seven deleted scenes running about 10 minutes, which are decent. There are four very brief featurettes with clips of interviews with Sampson, Whannell, Weaving and more. “Who. What. Where. When.” has interview clips talking about the plot and its characters. “Ego” features cast talking about characters motivation.

“Ticking Time Bomb” is a short featurette outlining the film’s focus. “1983 America’s Cup” features the cast discussing the importance of the America’s Cup in the film, which I did not catch at all. Lastly there are trailers for the film and other trailers as well included.