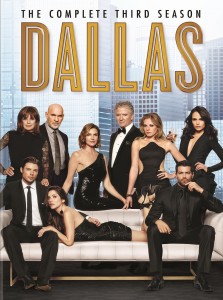 I never watched “Dallas” during its original run but I was certainly aware of its presence growing up. When “Dallas” came back in 2012, I tuned in from episode 1 and loved every minute of it. When Larry Hagman (J.R. Ewing) passed after at the end of 2012, I thought it would be the end of the show. The show continued on and completed out the series with this final third season. I thought this was a solid season even without J.R. I am sad to see this show end but at least it had a nice comeback and delivered three entertaining and exciting seasons.

Official Premise: In season three, Ewing patriarch Bobby Ewing (Patrick Duffy), now the senior member of the family after the death of his older brother, J.R., butts heads with John Ross (Josh Henderson), who is out to prove he can be just as powerful an ally or enemy as his infamous father. Meanwhile, Christopher (Jesse Metcalfe) is newly single and determined to make a name in the world of natural gas. Elena (Jordana Brewster) is blinded by thoughts of justice for previous wrongs, and Pamela Rebecca Barnes (Julie Gonzalo), the daughter of longtime Ewing rival Cliff Barnes (Ken Kercheval), is now married to John Ross and determined to have a happy ending.