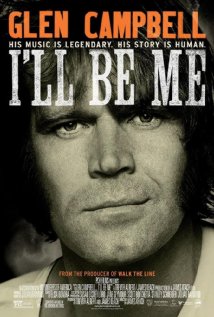 “Who’s that?” Each time an image flickers on the screen the man watching the film asks the same question. With each questions comes the same answer… “that’s you.” Eventually, 75-year old Glen Campbell nods quietly and seems to understand. “OK,” he says. “I’ll be me.”

One of the greatest entertainers of the last century, Glen Campbell shocked fans in 2011 when he announced that he was battling Alzheimer’s disease. Not one to shy from a fight, Campbell not only decided to record one last album, “Ghost on the Canvas” but chose to embark on a three-week “goodbye” tour…one which lasted 151 shows! “I’ll Be Me” takes you along on that tour and shares with you the ups and downs of this most personal of illnesses.

When I was a kid, Glen Campbell was IT! An accomplished musician (he played on many records in the early 1960s, including hits by Elvis Presley, Frank Sinatra, Bobby Darin and the Monkees. In late 1964 he filled in for Brian Wilson when the Beach Boys went on tour and his masterful guitar playing can be heard on the bands’ greatest album, “Pet Sounds.” In 1967 he hit the top when he released the single “Gentle on My Mind,” following that up with songs like “Wichita Lineman,” “By the Time I Get to Phoenix” and starring alongside John Wayne in “True Grit.” The 1970s brought him his own television series, “The Glen Campbell Goodtime Hour” and hits like “Southern Nights” and the song he is forever linked to, “Rhinestone Cowboy.” This is how I remembered Glen Campbell. Seeing him here, in excellent shape physically but slowed mentally is jarring. I’ll admit that I felt tears well up in my eyes watching him take in those old family home movies and not recognize himself.

The film is not all sadness. Shots of Campbell going through his normal day, talking like Donald Duck and singing familiar songs (ironically, one of the songs he remembers well is “I Remember You”). Sometimes he’s confused and sometimes he seems to understand what is happening to him. “I can still jump,” he says at one point, “I just can’t stay up as long.” With his loving wife Kim by his side, and three of his children in his band, Campbell’s tour is mostly successful. There are a few bumps in the road, like when the teleprompter (which shows Campbell the lyrics) stops working or when, like a young child who doesn’t understand, he complains about things that normally wouldn’t bother you or I, but there is also a sense of hope in the film. Musically, Campbell is still at the top of his game. He goes off on difficult guitar solos during the shows, and the skill needed to achieve this is there.

The film also contains testimonies from many of the people who have been part of or inspired by Campbell’s career. From songwriter Jimmy Webb to Vince Gill, from Sheryl Crow to Bill Clinton, from Blake Shelton to Paul McCartney, the list is overwhelming. There are also comments from fellow musicians like Kathy Mattea and Chad Smith (from the Red Hot Chilli Peppers) who have dealt with Alzheimer’s in their families. Director Keach places his cameras so that you feel like you are part of the film. You’re not eavesdropping on family conversations, you’re part of them. He’s been behind the camera for many years (when he’s not in front of it) and has proven that he has an amazing eye for telling story. And where Glen Campbell that story is not over. As he tells his family as the tour winds down, “I’m not done yet!”