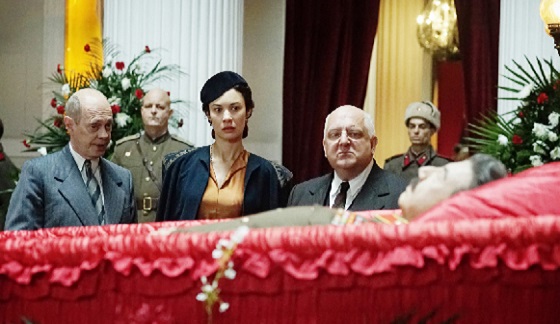 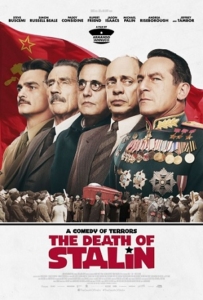 In the Soviet loop. Armando Iannucci brings his breakneck quips and futile power plays to Stalin’s final days in The Death of Stalin, a darkly hilarious take on a moment in history handled by a collection of top notch actors.

In 1953 Stalin (Adrian McLoughlin) sits atop a well oiled oppression machine. He doles out hit lists to his gulags on a daily basis and even among his closest confidants he wields terrifying power. Steve Buscemi’s sycophantic Khrushchev takes personal notes on what jokes bombed in his company so as not to repeat his mistakes. Inconveniently Khrushchev and company find their leader face down and on death’s door in a puddle of his own piss. With no official recourse for succession, the jockeying for power—and chewing of the considerable scenery—begins.

Filling out this Stalin’s cabinet with Buscemi is a dream team lineup of Simon Russell Beale, Michael Palin (my favorite Python!), Jeffrey Tambor and Jason Isaacs. To Iannucci’s credit none of the actors in this film are asked to adopt any sort of Russian or even any shared accent which only adds to the air of chaos in the party and likely is what frees up these actors to stay absolutely focused on the script’s fast and fierce comic timing. Additionally just when you’re getting the rhythm of this first set of yes-men, Andrea Riseborough and Rupert Friend are imported in as Stalin’s wayward offspring to inject even more manic energy into the proceedings. Friend in particular is a revelation as Vasily, a bellowing drunkard who arrives landing insults with surgical precision and more often than not, departs by being wrestled physically from the frame.

I had some hesitation going into this film being pretty much unaware of the specifics of this moment in history and wondered whether that would impact my experience however this turned out not to be the case. The themes of absolute power corrupting absolutely and the pettiness of men are always ripe for political farce especially from the likes of the man behind “Veep” and this spectacular cast.