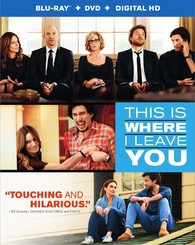 Here is the main issue with “This is Where I leave You”, it is packed with a great ensemble cast including Jason Bateman (“Arrested Development”); Tina Fey (“30 Rock”); Jane Fonda (“Barbarella”), as well as Adam Driver (“Star Wars Episode VII”); Rose Byrne (“Insidious”); Corey Stoll (“House of Cards”) and Kathryn Hahn (“Parks and Recreation” and with a cast like that expectations are very high but this film has its moments and those moments don’t last long. This drama/comedy is extremely forgettable and you will have probably forgotten about it by the time you get to the end of this anyway.

Official Premise: When their father passes away, four grown siblings, bruised and banged up by their respective adult lives, are forced to return to their childhood home and live under the same roof together for a week, along with their over-sharing mother and an assortment of spouses, exes and might-have-beens. Confronting their history and the frayed states of their relationships among the people who know and love them best, they ultimately reconnect in hysterical and emotionally affecting ways amid the chaos, humor, heartache and redemption that only families can provide— driving us insane even as they remind us of our truest, and often best, selves.

Warner’s is releasing this a a combo pack with a Blu-Ray + DVD + UltraViolet Digital HD copy. There is nothing special or actually bad with the Blu-ray presentation. It is basic 1080p transfer with a DTS-Master Audio 5.1 track. The special features aren’t music special either. There is an interview and a commentary track from Shawn Levy and Jonathan Tropper in “· The Narrative Voice”. There are two featurettes “The Gospel According to Rabbi Boner”, “Points of Departure” and some deleted/extended scenes included.

Own “This is Where I Leave You” on Blu-ray Combo Pack, DVD, and Digital HD on December 16th