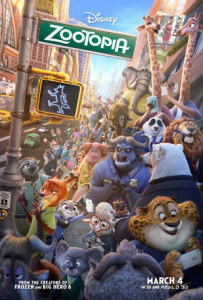 I doubt that Disney had plans to release “Zootopia” in the thick of the 2016 election season. I’m sure they also couldn’t predict the uneasy distrust and fear of culturally different people that’s currently permeating throughout our society. “Zootopia”, obviously by coincidence, has a beautiful message about not judging books by a cover, petty bullying to get one’s way, and stereotyping. It also discusses that no matter how far we think we’ve come and all the things we claim to know, a lot of us, including the best of us, are sometimes still primitive with our feelings and attitudes.

The anthropomorphic animals in “Zootopia” seemingly live in harmony. Every animal is broken down into prey or predator, but cheetahs and other carnivores live peacefully alongside giraffes and other herbivores (which makes you wonder what’s on the dinner plates of all these meat-eaters). It seems like the world’s focal point is a massive city known as Zootopia, which itself is divided in different climates to suit the creatures living there.

The movie itself starts out in the vast lands and countryside surrounding Zootopia. In Bunnyburrow, we meet Judy Hopps (Goodwin), a hopeful bunny that hammers in another theme of the movie, never give up on your dreams. Despite her size, and the stigmas surrounding her breed, she wants to become a cop in Zootopia. Despite her childhood trauma involving a boy fox who claws her, and everyone telling her to give up on her aspirations (even her parents), she does join the law enforcement after enduring a tense trial and error process.

Once she arrives to Zootopia, she doesn’t get any respect from her superiors or co-workers and is relegated to meter maid duty. The insults by angry motorists clutching their tickets and being relegated to menial tasks don’t ever kill her chipper demeanor. But a mocking career con-man fox, Nick Wilde (Bateman), who enters the picture, certainly changes her optimistic outlook into a much sourer one. So when 14 animals go missing from Zootopia and she’s tasked with finding one of the animals, an otter, she tries to make the most of it, and even finds out that Nick may know where the otter went.

In a world where studios continue to franchise building, Disney may have crafted one of the most deep, rich, and visually thrilling worlds. “Zootopia” could easily have a couple of sequels, its own TV show, and spin-offs because of how well planned out and distinct everything is. Everything, from the mice scurrying about in their own community, to sloths operating the DMV, and polar bears as mafia boss underlings, feels so well thought out, organized, and fluid. Lesser writers, directors, and studios, would have fumbled everything or not even tried something this enterprising.

“Zootopia” is populated with more rich visual sight gags than it does animals. Some of the jokes require you to keep your eyes on the screen, your ears fixed on dialogue, and a decent understanding of American pop-culture (think contemporary top 40 music, AMC award-winning TV shows and AFI’s third greatest movie of all time). There are an even proportion of jokes for kids and adults and for kids with a mature side and adults who never grew up. Even those who don’t warm up to Judy’s vivacious personality and Goodwin’s bubbly line delivery will still admit this is the cutest movie of the year.

There’s a lot to unpack with “Zootopia”, because it fires on all cylinders. The voice acting is spot-on, the visuals are crisp and engaging, and the three directors, two scriptwriters, and seven story writers never lost sight of what they wanted to do. They came together and layered every little bit instead of crowding our senses with it. A week after the 88th Academy Awards, we’re already looking at next year’s contender for Best Animated Feature.