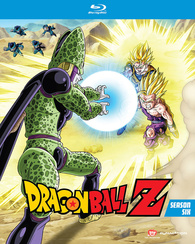 As we are flying through the seasons this year, FUNimation Entertainment is continuing the love for Dragon Ball Z Uncut with the sixth season which features episodes 166-194 of the classic anime series. The season around the Cell Games Saga and originally aired from 1992–1993 in Japan and 2000 in the U.S. on Cartoon Network dubbed in English. This is a great season as Cell was always a kick-ass villain. Three more seasons to go after this Funimation is determined to finish the series before the end of 2014.

Official Premise: Having at last achieved his Perfect Form, the evil Cell’s powers have soared to terrible new heights, overshadowing even the greatest of the Z-Fighters. Eager to demonstrate these newfound abilities and prove his superiority, Cell proposes a tournament. He issues an ultimatum to the people of Earth: produce a worthy opponent or die! The day of reckoning upon them, Goku and the Z-Fighters line up to participate in Cell’s twisted game, the world’s best hope of defeating the monster.

But they are not the only ones brave enough to accept the challenge. The reigning World Martial Arts Champion, Mr. Satan, has also stepped into the ring! Now, with the fate of the human race hanging in the balance, one of these valiant fighters must come forward to defeat the seemingly invincible Perfect Cell. But who will it be?

Like the past seasons, this one has be given a frame-by-frame restoration to remove blemishes, tape marks and foreign bodies from the film. The 1080p transfer at a 16:9 aspect ratio looks amazing. The audio tracks including the Japanese audio and two English tracks: the U.S. English-language broadcast dub and a mix with English dialogue and Japanese music have been re-mastered in the interest of noise reduction and superior sound quality, and the colors are bolder and more vibrant.