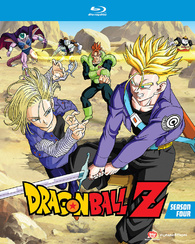 FUNimation Entertainment is power housing through this series starting with the first at the beginning of the year and averaging about a season a month. Season Five is already set for release on June 24th as well. “Dragon Ball Z: Season Four” was personally never my all-time favorite. It follows the Garlic Jr., Trunks and Androids Sagas. This uncut collection features episodes 108-139 of the classic anime series, which are presented in remastered high definition for the first time ever.  These episodes have never looked better. If you are a fan of “Dragon Ball Z”, this is yet another impressive release! Keep them coming Funimation!

Official Synopsis: Having returned victorious from their battle with Frieza, the Z-fighters can at last breathe a collective sigh of relief. But they won’t have long to rest. A new host of villains has appeared, ready to wreak havoc on the Earth – and Goku, the Z-Fighters’ greatest hero, is still missing!

These episodes have undergone a frame-by-frame restoration to remove any blemishes, tape marks and foreign bodies from the film. Funimation has been consistently delivering for the fans on this series and this season is no different. There are three audio tracks included, the Japanese audio and two English tracks: the U.S. English-language broadcast dub and a mix with English dialogue and Japanese music. These have also been re-mastered in the interest of noise reduction and superior sound quality. This series has also received a precise shot-by-shot reframing to create “a modern HD widescreen presentation.” So quality is the key word here for sure.

Like the seasons two and three, Funimation has stepped up from the first season and delivered some decent special features with this season. There is a two part interview series with “Inside Dragon Ball Z” featuring chats with Matthew O’Hara and Daniel Mancilla. There is also a feeaturette called “From the Vault” with a look into Goku vs. Vegeta and “The World of Dragon Ball Z”. Lastly there is also Textless opening and closing songs and trailers included.  I am holding that that we will be getting some commentary tracks on this series before we get to season 9, fingers crossed!