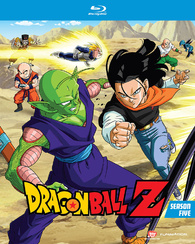 I am currently in the process of moving and recently canceled my satellite TV service in preparation of the move. So only having a Blu-ray player, Season Five of “Dragon Ball Z” couldn’t have arrived at a better time. It is funny you can fly through over 600 minutes of something when you have nothing else to do. Season Five includes episodes 140-165 of the classic anime series, uncut and presented in remastered high definition for the first time ever! I can’t wait for Season Six since that will include the Complete Cell Games. Oh baby! Can’t wait!

Official Premise: As the battle with the Androids rages on, a fierce evil rises from the shadows: the monster known as Cell! Dr. Gero’s heinous creation is the ultimate weapon, a fighting machine built from the genetic material of the greatest warriors ever to walk the Earth!

These episodes have undergone a frame-by-frame restoration to remove any blemishes, tape marks and foreign bodies from the film. Funimation has been consistently delivering for the fans on this series and this season is just as impressive. There are three audio tracks included, the Japanese audio and two English tracks: the U.S. English-language broadcast dub and a mix with English dialogue and Japanese music. These have also been re-mastered in the interest of noise reduction and superior sound quality.

There are some decent special features as well included for this release. There is a great behind-the-scenes look with “Dragon Ball Z Retrospective Part Five”. There are two featurettes under “Inside Dragon Ball Z”. The first is an “Interview with Sonny Strait”, the voice of Krillin. The second is an “Interview with Stephanie Nadolny”, the voice of Goku’s son, Gohan. Lastly there is a Textless Opening & Closing Song and a U.S. Trailer included.