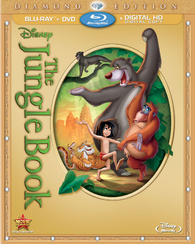 “The Jungle Book” is a Disney classic and packs some of the best and most fun jazzy, toe-tapping songs, including “I Wan’na Be Like You” and Academy Award-nominated classic “The Bare Necessities”. My 20-month old daughter has been watching the commercials of this Blu-ray and has already been dancing to the music. This is the first time that this film has ever been released on Blu-ray and also the first in almost seven years that it has been released from the Disney vault. “The Jungle Book” was Disney’s 19th animated masterpiece and also the last animated feature to have Walt Disney’s personal touch. Already watched this twice with my daughter, I have a feeling we are going to get a lot of use out of this.

Official Premise: Meet the most unforgettable characters and embark on a thrilling adventure with Mowgli as he journeys deep into the jungle and learns The Bare Necessities of life from happy-go-lucky Baloo the bear. Meet Bagheera, the wise old panther, and crazy King Louie, the orangutan. But watch out for the cunning tiger Shere Khan and Kaa, the ssssneakiest snake in the jungle! Explore your family’s wild side as you venture into The Jungle Book for extraordinary adventures and a heartwarming tale that celebrates the true meaning of friendship.

Disney released “The Jungle Book” under it’s Diamond Edition banner. It comes in a combo pack with a Blu-ray + DVD + Digital Copy included. The 1080p transfer is absolutely fantastic. I remember watching this film on VHS as a kid and now as a adult, I was literally blown away by this presentation. My daughter was literally glued to the TV and just kept pointing at all the characters and naming them. There are two options for this film in terms of audio. There is a super impressive, brand new DTS-HD Master Audio 7.1 track. It is fantastic and really works well with the music. It also comes with the original theatrical Dolby Digital Mono track as well for audio purists.

There is some great new special features created for this Blu-ray. There is a brief intro by composer Richard Sherman, which is option way to start the film. There is an 18-minute promo featurette for Disney’s Animal Kingdom theme park. There is an alternate ending included “Mowgli and The Hunter”, which is presented in storyboard format. There is also a fantastic 40-minute documentary “Growing up With Nine Old Men”, which includes a series of interviews looking into chief animators. The rest of the remaining extras have all been ported over from previous DVD editions.

There is a very interesting audio commentary track with the voice of Mowgli, Bruce Reitherman, Composer Richard Sherman and interview footage edited in from members of the original production team. There is also a five-part “Making of”, which runs just over 45 minutes. Rounding out the rest of the extras include four additional featurettes, a wildlife video for kids, seven deleted songs, sing-along lyrics and music video from Jonas Brothers. Of course, be sure to also pause the film when watching to take advantage of “Disney Intermission”, which is hosted by Baloo.