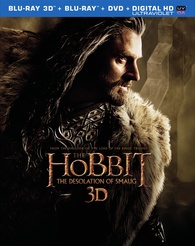 Despite what anyone says, I loved “The Desolation Of Smaug”. I was literally unable to blink during this film. I have people backing me as well. My wife (unlike myself) was not a huge fan of “An Unexpected Journey” yet she also loved this film. I thought it was a action packed thrilling fantasy adventure ride through Jackson’s Middle-earth. I am literally counting down the days till the conclusion film to the trilogy “There and Back Again”. I agree compared to the book, this trilogy might be a little stretched out but as a fan of Jackson’s Rings trilogy. I just want more. I would definitely recommend this theatrical cut on Blu-ray, especially in 3D. I stress theatrical cut because we all know that there will be an extended cut released this Fall to time with theatrical release of “There and Back Again”. Still though, this is no question of my favorite films of 2013.

Official Premise: “The Desolation of Smaug” continues the adventure of Bilbo Baggins (Freeman) as he journeys with the Wizard Gandalf (McKellan) and thirteen Dwarves, led by Thorin Oakenshield (Armitage), on an epic quest to reclaim the Lonely Mountain and the lost Dwarf Kingdom of Erebor. Having survived the beginning of their unexpected journey, the Company travels East, encountering along the way skin-changer Beorn and a swarm of giant spiders in the treacherous forest of Mirkwood. After escaping capture by the dangerous Wood-elves, the Dwarves journey to Lake-town, and finally to the Lonely Mountain itself, where they must face the greatest danger of all–a creature more terrifying than any other; one which will test not only the depth of their courage but the limits of their friendship and the wisdom of the journey itself: the dragon Smaug (Cumberbatch).

Warner Brothers really delivered an amazing release for “The Desolation of Smaug” with a combo pack including a Blu-ray 3D + Blu-ray + DVD + HD Digital UltraViolet copy. The film is much darker in color and tone compared to “An Unexpected Journey” but I think that the 1080p transfer really looks even better than the first film. The 3D transfer particularly stands out for me. When I saw “An Unexpected Journey”, I thought it had a few great 3D moments but this film really stepped it up a notch. Just seeing Smaug in 3D is worth the purchase alone. What is also good is that the film also plays well in 2D as well. I think that is not the case always and a real bonus. Now concerning the DTS-HD Master Audio 7.1 surround track, it is absolutely flawless. The action is perfectly toned and the score is well-balanced. I had the picture framed on the walls shaking with this release. Highly recommended.

When it comes to the special features, like “An Unexpected Journey” theatrical cut Blu-ray as well, I am left wanting more. I guess we will all have to wait till the extended edition release to get some real special features. “Peter Jackson Invites You to the Set” is a two part look into the behind-the-scenes on this production. There are four Production Videos featurettes including “Introduction to Pick-Ups Shooting,” “Recap of Pick-Ups, Part 1,” “Recap of Pick-Ups, Part 2” and “Music Scoring.” “Live Event: In the Cutting Room” is a recording of the March 2013 worldwide live event where Jackson answered fans questions and gave a tour of his production facilities. “New Zealand: Home of Middle-earth, Part 2” gives a follow up look into the locations. Lastly there are Trailers & Previews and Music Video for “I See Fire” by Ed Sheeran.