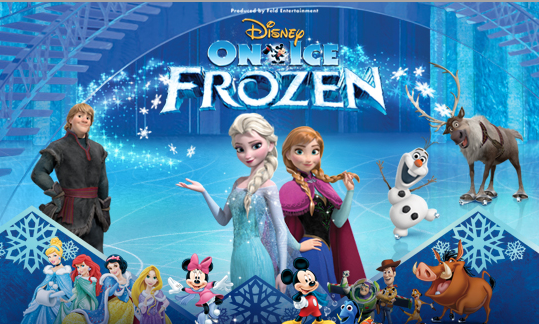 Feld Entertainment returns“Disney on Ice” to the Amway Center this month with the instant classic and record breaking film “Frozen” taking center stage. “Frozen” came out nearly a year ago and has not cooled down since. People really love this film. 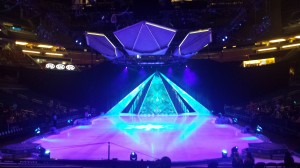 Everything about it from its characters to its music. What little girl doesn’t go crazy when “Let it Go” comes on the radio, including my own two year old daughter. Disney and Feld Entertainment really brought the magic again with this new show. It was truly one of the best Disney on Ice shows that I have seen in recent years and will leave every single “Frozen” fan 100% satisfied.

The show kicks off with our hosts Mickey Mouse and Minnie Mouse and a few familiar faces such as Disney Princesses Snow White and Rapunzel as well as characters from favorites like Disney∙Pixar’s Toy Story, Finding Nemo and Disney’s The Lion King. The focus of the show is the celebration of love and friendship and it really hits home. What I really loved about this show is the fact that it was decided to focus on “Frozen” entirely. When I have seen past shows of Disney on Ice, they have split the bill between various different set but this one is almost a word for word adaption of “Frozen” but on ice. They changed a few things here and there and re-ordered a few of the songs but it works extremely well 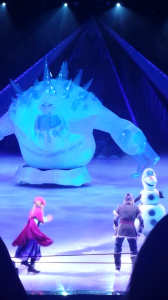 and the audience was going absolutely crazy for it.

Official Premise: Enter a fantastical winter wonderland beyond all imagination at Disney On Ice presents Frozen! The heartwarming, Academy Award-winning tale you love is now LIVE and skating into your town. You’ll be magically whisked away into the wintery world of Arendelle, where you will be dazzled by amazing special effects and astonishing skating. Sing and dance along to inspiring songs, including “Let It Go.” Join royal sisters Elsa and Anna, the hilarious snowman Olaf, Kristoff, his loyal reindeer Sven and the mystical trolls as they journey to discover that true love is ultimately the most magical power of all!

I have been to plenty of rock concerts and it is funny to say but when Anna and Else hit the ice, they were like rock stars. No joke, these girls were screaming like their lives depended on it. It really brought the energy up in the venue. I should also point out that this was only a preview night, the attendance was very exclusive and the audience was less than half capacity. But still, this event reached some very high decibels. Also one of the best feeling as a father is looking over and seeing my two year old daughter going crazy with her favorite songs, dancing and singing along! Disney and Feld Entertainment continue to bring the magic to their audience and if you have chance to see this show, I would highly recommend it. “Frozen” fan or not, it will melt and at the same time warm your heart right up.

Click here to purchase tickets to “Disney On Ice Presents: Frozen” during it’s visit to the Amway Center