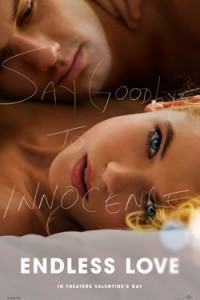 It must be that time of year. The quick cash in where nearly every company tries to find that bankable Valentine’s Day product. I’m not saying it isn’t a holiday(although that is up for debate), but unlike most economically driven holidays where plenty of businesses can spread out their plans over a couple of months, Valentine’s Day only hits home for a couple of days or just for the one week it rests upon. In terms of the movie industry, February is an opportune time to roll out some romance movies. This year the day of love falls on Friday and instead of taking that opportunity to shine, they’ve rolled out a cart of trash for everyone to feast on called “Endless Love”.

It’s graduation day at the only school in America that doesn’t have ugly teenagers. That’s where we meet David Elliot (Pettyfer). He looks about 10 years older than he’s suppose to be and looks so airbrushed you’d think they patterned the Ken doll off of him. Which raises even more questions as to how he’s single. Anyway…David is smitten by a girl he’s never even talked to, Jade Butterfield (Wilde). David tells us that he’s spent two years simply watching her from afar; too afraid to talk to the most antisocial, quiet girl in the school. Don’t worry, there’s plenty of more things that don’t make sense. So of course the only way for these two to finally meet and converse is at David’s job as a valet. He wins her over with a little grand theft auto and a bunch of quick near kisses. I’m barely 10 minutes in and I already wish I had the metaphorical watch to look at. So as we go through the motions, we realize that our protagonist of this movie will be Jade’s father, Hugh (Greenwood). This is because he automatically distrusts David’s chiseled good looks and scoffs at the fact he has no ambitions for college. Instead of character motivations, we’re given long speeches by characters that are horrendously written and sometimes woodenly delivered. These useless dialogues are suppose to make us feel like our characters have a deeper understanding of life, even though their asinine actions would tell us otherwise. Eventually I quit taking notes because I was putting way more thought into my review than the writers did on this script.

If you’ve never seen attractive white people fall in love before, then this movie will feel like a breath of fresh air. Since I doubt any of you haven’t, you’re going to get through the first act of this movie wondering if the projectionist left a Lifetime movie on by mistake. As you wait for the predictability to play out, you’ll begin to wonder if you’re actually trapped in a time loop where time doesn’t pass because the length really begins to feel like water torture as you pass the hour mark. Then the third act really drags out and pulls out nearly every soap opera twist it can find. This movie falls in the category of “romance movies”, but even admirers of that genre will find this movie incredibly stale. And as the old saying goes, if you’ve seen one, you’ve seen them all.

As for the veteran actors in this movie, like Greenwood. You really feel sorry for them. The most agonizing moment comes when Robert Patrick is wheeled out as David’s father, Harry. He was probably has the only enjoyable moments because my mind wandered off to him trying to kill John Connor. It’s sad really. Hollywood had the chance to prove there’s plenty more to be done with the genre this week. They knew movie lovers would use this weekend as a chance to enjoy their two loves, their significant other and movies. Instead of dazzling them and giving them something memorable, Hollywood generated another generic and forgettable movie. You’re better off staying home with your loved one this Friday. Order a pizza and watch “Be My Valentine, Charlie Brown”. It’s more touching than this plane crash.