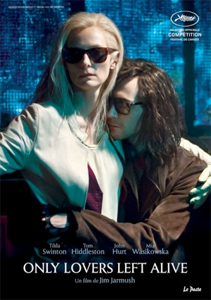 May 2014 – “Only Lovers Left Alive” made its US debut at the New York Film Festival this past autumn, when this review was posted. It’s subsequently been on limited release since April. I can’t recommend this film highly enough and we are reposting the review in light of its nationwide expansion this month. Enjoy!

Tilda Swinton and Tom Hiddleston, already pretty ethereal as they are, are well cast as vampire lovers Adam and Eve in Jim Jarmusch’s wonderful upcoming film, Only Lovers Left Alive. The film finds Adam at a low point in his long existence with wife Eve swooping in to lift him from his disappointment at the state of the modern world. It’s a clever, macabre character study that beneath its too-cool undead protagonists lies a tremendously romantic beating heart.

As Adam, Hiddleston drives away any and all comparison to that other shaggy, dark-haired immortal he has so expertly played recently. Adam is a fascinating creature who displays a wall full of iconic mortals in his den, all the while repeatedly protesting that he has no heroes. Everyone from Edgar Allan Poe and Oscar Wilde to Rodney Dangerfield and Iggy Pop are framed in a shrine to human imagination that at this point in time Adam is lamenting the “zombies” have lost. This admiration for human achievement somewhat undermines Adam’s intentions to kill himself with a wooden bullet obtained from his stoner human buddy Ian (Anton Yelchin in a Renfield-goes-Rock-n-Roll mode). Adam wants to seem the depressive loner, it’s a romantic notion that suits his look and music, but every so often there are cracks in this facade where Hiddleston lets through brilliant moments of enthusiasm. He can be completely enchanted by an unknown singer in a back alley club or excited over a new guitar despite an already huge collection. Adam gives an angry impassioned speech about the world’s dismissal of great scientists–Tesla, Darwin and the like–but that he is able to get so worked up about the fate of humanity weakens his stance that he’s lost all hope in it.

These small embers of optimism are fanned by Adam’s wife Eve and Swinton is perfect at embodying his more mischievous other half. When we meet her, Eve is living apart from Adam in Tangier trying to stir up some controversy in the mortal world by goading her friend, fellow immortal Kit Marlowe (John Hurt), into dusting off the Shakespearian authorship debate just for a bit of entertainment. She’s recalled to her husband in Detroit when she senses Adam’s melancholy over a touching video phone call they share.

Eve having to carefully engineer night flights to make such a journey possible is one of the many vampiric touches Jarmusch cleverly slips in without being explicitly expository about his brand of bloodsucker. Others include Adam’s usage of preternatural speed only when really pushed or their eyes growing paler the more in need of a drink they are. There are references to a larger crisis of contaminated human blood, causing Adam to haunt a complicit doctor (Jeffrey Wright, making a huge impact in just two scenes of bouncing dialogue off a hilariously unresponsive Hiddleston in scrubs) for a healthy supply, but that’s not the focus here.

Rather, Eve is content to share blood popsicles with Adam during a game of chess or bond over their mutual appreciation of Jack White. Such smaller moments are where Hiddleston and Swinton really shine. They have a chemistry that feels lived in without any of the negative connotations so often associated with the “old married couple.” And they really can’t get much older than these two. One gets the sense that Adam’s depression is just part of a larger cycle the two have weathered many times before with the gleeful Eve returning to turn over the hourglass that Adam says is running out of sand. In a particularly joyful scene, Eve finds Adam’s would-be means of suicide and defuses the tension by drawing him into a heartwarming dance to Denise LaSalle’s “Trapped by a Thing Called Love” instead of an argument. This tendency to physical interaction over words in many instances adds to an animalistic dynamic this little clique of vampires share. It becomes more pronounced when Eve’s party-vamp sister Ava (Mia Wasikowska) drops in on the couple. In the only concrete conflict of the film, the sister from LA throws a monkey wrench into Adam and Eve’s chilled out lifestyle, demanding they all go out and over indulge on their “good” blood. Like most bingeing, it doesn’t end well. The sisters together are able to push Adam around rather like the females in a pride of lions, an idea reinforced by Gerd Zeiss’s wild hair designs which incorporated actual animal furs.

Beyond the cool makeup design, Jarmusch creates a fascinating nighttime world for his characters to inhabit. Eve is surrounded by books in her lush Tangier location while Adam’s lair in Detroit is completely wired and filled with all the things he’s engineered himself from decades of technological equipment. Both the cities are richly shot by Yorick Le Saux who finds beauty both in the dark and in locations of complete decay. Jarmusch’s own band SQURL reinforces this dark environment with a hypnotic guitar driven soundtrack that will haunt viewers long after the credits roll. Still, despite its gothic trappings, Only Lovers Left Alive is a surprisingly funny and touching character study of what it is to sustain love and inspiration throughout a very long lifetime.