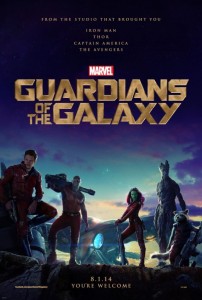 Did one of the directors for “Movie 43” and writer for both live-action “Scooby Doo” movies just create the best Marvel movie? Yes. Yes he did. “Guardians of the Galaxy” is a consistently fun and entertaining addition to the Marvel canon with enough emotional resonance to exceed beyond your stereotypical summer blockbuster. In a Marvel movie universe populated with an eccentric, metal covered billionaire, a golden haired demi-God and an experimental super soldier, the down on their luck, rag-tag bunch in “Guardians of the Galaxy” is a much needed addition.

While “The Avengers” is a cinematic juggernaut in superhero movies, “Guardians of the Galaxy” features a cast of relatable people and creatures that are far from being “super”. There’s Star-Lord/Peter Quills (Pratt), a human space outlaw who carries around an aged Walkman in the sci-fi landscape because it’s one of the few mementos he has to remember Earth before he was abducted by interstellar bandits. Pratt packed on some serious muscle for the role to give Star-Lord a tough exterior, but Pratt’s natural ability to be a spontaneous goof gives the movie a lovable charming lead.

Counterbalancing Star-Lord is Gamora (Saldana), a personal assassin to Thanos that is ready to redeem her previous misdeeds with steely gazes and swift, punishing punches and kicks. Saldana portrays one of the best superhero heroines in recent memory, providing a necessary ingredient to the group instead of being typecast as the damsel in distress. Its good Gamora can handle Star-Lord’s sarcasm and humor because also compensating for the smug Terran hero is Drax (Bautista). He’s a lumbering muscle with arms as big as my head and he’s intent on seeking vengeance for the murder of his family. It doesn’t help he can’t take a joke or grasp the concept of metaphors.

The two make-up and prosthetic covered heroes are offset by our two CGI heroes, a rambunctious space raccoon by the name of Rocket (Cooper) and a humanoid/tree called Groot (Diesel). These four help maintain an equilibrium between computer animated grandeur and hand crafted elegance. Cooper gives Rocket an arrogant East Coast gangster tone and steals a couple of scenes with his bitter quips. Meanwhile, Diesel had the arduous task of creating a vast depth to Groot since Groot’s only spoken words are “I am Groot”. Despite this hindrance, there are a lot of surprising vocal inflections in the deep rumble of Groot’s voice. He also appears to be the most heartfelt. At one point the group worries about street children pickpocketing them while Groot simply grows a flower out of his hand to offer to a dirt covered girl.

If you think I’ve been focusing on our quintet more than the plot, that’s because they are what makes this movie work. The story is a simple introduction paired with the undeveloped bad guy and explosive third act, but without these actors, their portrayals, and James Gunn’s sharp dialogue, this wouldn’t have excitedly leapt off the script pages. The obvious thing to compliment with a movie like this is the vibrant settings, majestic set-ups and awe-inspiring action, but what really left me satisfied was the foul-mouthed, crotch adjusting, band of misfits that find companionship and discover that drive to do good by the end of the movie. Although they’re still a foul-mouthed, crotch adjusting, band of misfits as the credits roll.

While I listed off a few of James Gunn’s embarrassing credits to begin this review, I’d like to point out that Gunn’s weakest efforts are still pieces that highlight Gunn’s youthful joy for nostalgia and fun with tasteless humor. Without his obscure and essential input, “Guardians of the Galaxy” would have not trekked into more peculiar territories, like Star-Lord’s mixtape that doubles as 70’s and 80’s pop-culture citations, the playful smile from Groot after he probably murder dozens of baddies, and a cameo by Lloyd Kaufman. Christopher Nolan and Marvel have been the “How-To” when it comes to making superhero movies, but they might want to learn a thing or two from Gunn since “Guardians of the Galaxy” is the best movie of the summer.