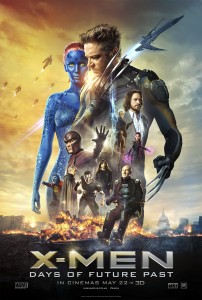 “X-Men: Days of Future Past” is the seventh film in the “X-Men” film series. It is billed as partially a sequel to “X-Men: The Last Stand” and also a sequel to  “X-Men: First Class”. If you are not familiar with the series, “The Last Stand” was the final X-Men before they did two spin-offs with Wolverine and made “First Class”, which was a prequel story. So if you not caught up to date with this series, things could get a little confusing with this one. “X-Men: Days of Future Past” also brings back director Bryan Singer, who directed 2000’s “X-Men” and 2003’s “X2”. “X2” is probably still the best film in the franchise but it is great to see Singer back behind the directors chair. You can tell that they were really trying to give this film a lot but for me it feel a little flat in terms of being epic.

What “X-Men: Days of Future Past” does has is one hell of an ensemble cast including Hugh Jackman, James McAvoy, Michael Fassbender, Jennifer Lawrence, Halle Berry, Ellen Page, Nicholas Hoult, Shawn Ashmore, Peter Dinklage, Ian McKellen and Patrick Stewart. Now as cool as that sounds, I really wasn’t blown away. I enjoyed the film but I felt that it was very slow moving throughout certain parts. I also felt like the parts set in the future weren’t really fleshed out and it felt like a way for them just to throw in the past roles for Stewart and McKellen to get a better drawn. In fact, these guys did fairly little at all in this film. Jennifer Lawrence was exceptional as usual. James McAvoy also did a fantastic job. Halle Berry was next to useless in the film as well as Anna Paquin, who was like billed fifth yet had about five seconds of screen time and no lines. I dig what they were going for but it feels just a bit too ambitious and the pay off is too obvious.

The film picks up in the dystopian future of 2023 with all life forms practically extinct at the hands of the robots known as Sentinels. We meet up with the few remaining mutants  including Professor X, Magneto, Wolverine, Storm, Iceman, Shadowcat, Colossus and even a few new characters (to the series) including Warparth, Sunpot and Blink (all of whom, I would have loved to see fleshed out much more).  They are all teaming up in order to survive and try to find a way to eliminate the creation of the Sentinels. With the help of Shadowcat, they send Wolverine back to 1973 to stop Raven aka Mystique from killing the scientist that created the Sentinels, which was the event that lead to their current impending doom. Wolverine has to race against time to try and convince a much younger Professor X and Magneto to work together in order to try and save the world.

My biggest problem with this film is that it relies heavily on the events of “X-Men: First Class”, which is not my favorite entry in the franchise at all. There were parts that I really loved here like the addition of Quicksilver (Evan Peters) but the character was there and gone again before you finished blinking. Our audience in the theaters was literally screaming out loud with laughter and cheer during his scene and I was so hoping that there would be more…but that was not the case. I do not know why they went heavy on focus with Wolverine (again!). I mean hasn’t he had enough films focused around his character already, I want a few face for these films…aka more Jennifer Lawrence perhaps. There is quite the future already planned out for this series with “X-Men: Apocalypse” already scheduled for a May 27, 2016 release date.

“X-Men: Days of Future Past” film was actually shot in 3D, which I thought that it was very impressive. I have heard mixed feelings on it already but I actually really enjoyed it. The scenes set in the future were very well done and the ending climax was quick impressive as well. Since this film was set split from the future and 1973, there is two different look to the film itself. I really liked how the 70’s scenes have a completely different almost washed out look to them. I also enjoyed the Super 8 footage used in certain scenes. If you have read any other reviews, I have seen this film being called “the best superhero films to date”, I personally didn’t think that was the cast at all. It is definitely a step up from “X-Men: First Class” but there were certain parts that dragged for me. I also felt like the story set in the future ended up really being more of a filler and didn’t really get a chance to really kick ass. Worth checking out if you love “X-Men” just keep expectation on the lower side.