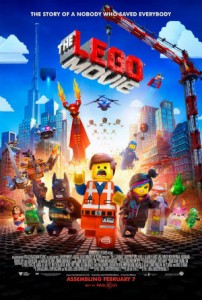 “Everything is Awesome!” Or so goes the very catchy song that plays constantly on the radios of the citizens of Bricksburg, personally approved by President Business. An appropriate song, as it fit’s the movie it’s featured in perfectly.

An amazing film on so many levels, the creators of “The Lego Movie” have taken a simple plaything – seriously, it’s a block of plastic – and turned it into a fun, action packed adventure for the whole family. The story begins when Lord Vitruvius (voiced by the great Morgan Freeman) informs his followers that one day a “master builder” will show him/her self and find the missing piece to save their world. Eight and a half years later we’re introduced to Emmet (Pratt), an ordinary citizen with an ordinary job who happily sings along with the above mentioned song, watches the land’s number one television show (“Where Are My Pants?”) and lives his life by the instructions provided. One day he stumbles onto a work site where he interrupts Wyldstyle (Banks) in mid-search for the legendary missing piece. Soon he is drafted into a rebel group that includes many of the familiar pop culture characters of the past 50 years, from Batman (Will Arnett) to Lando Calrissian (Billy Dee Williams). Pursued by Bad Cop (Liam Neeson), the group manages to stay one step ahead of being captured. They discover a plot to destroy their world, courtesy of a weapon known as KRAGLE. Can our heroes save the day? Come on…Lando Calrissian.

I must admit that I never really played with LEGOs as a kid. The fact that I couldn’t even build a square probably had something to do with that. But I’ve always admired the people that can take a box and build the Death Star from “Star Wars.” That admiration grows 10 fold for the makers of this film. Everything you see on screen – from the characters, their homes…even the clouds in the sky and the water in the ocean…is a LEGO. And if you can, catch this in 3D – it’s pretty incredible. The action on screen is accompanied by some great voice actors obviously having fun. As Batman, Arnett steals the film, so much so that you can only hope for a stand-alone Batman/LEGO film one day. Others dropping by to lend their talents include Jonah Hill, Channing Tatum, Dave Franco and Nick Offerman. Even Shaquile O’Neal drops by. Morgan Freeman and Shaq – you’re not going to see these two guys together on screen very often. That’s awesome!