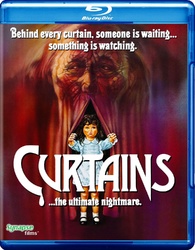 I guess “Curtains” is one of those films that you have to grow up with to love because I definitely didn’t love this film at all. As a horror fan, I try to catch as much as I can but I never watched this film before but I really struggled through these 90 minutes. All the good kills were off camera, the plot was a rollercoaster ride of disaster from bad to worst with no track or direction. I do absolutely love John Vernon (“Killer Klowns from Outer Space”) and Samantha Eggar (“The Brood”), so it pains me to say that this is not the horror classic that I was expecting.

Official Premise: A group of women gather for a weekend casting call at the secluded mansion of director Jonathan Stryker (Vernon). He’s searching for the perfect woman to play the role of the crazed character “Audra”, and these women are just dying for the chance to play her! Stryker’s last star, Samantha Sherwood (Eggar), is so determined to get the part, she committed herself to an asylum to prepare for the role. Unfortunately for all, a crazed killer in a disgusting “hag” mask is viciously murdering everyone one by one. Who will survive the final curtain call?

I have been seeing tons of Blu-ray reviews for this title and they are all praising this film and it’s release to the highest degree. I really wasn’t blown away at all. We get here a brand new 2K high-definition transfer from original vault materials, so I guess this film had to look absolutely terrible but I wasn’t thrilled. The colors seemed muted and there was tons of noise distortion. The 5.1 surround track, which was specifically created for the Blu-ray is decent though. With all the hype I was just expecting so much more.

The special features are solid like most releases from Synapse Films. There is an all-new retrospective called “The Ultimate Nightmare: The Making of Curtains”, which features interviews with Director Richard Ciupka, Stars Lesleh Donaldson & Lynne Griffin, Editor Michael MacLaverty, Special Make-Up Effects Creator Greg Cannom, and Composer Paul Zaza. There is an audio Commentary with Stars Lesleh Donaldson & Lynne Griffin as well as two audio interview with Producer Peter R. Simpson and one with Star Samantha Eggar. Lastly there is a Theatrical Trailer included.