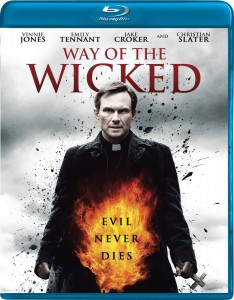 I know, I know…I need to stop being lured into watching sure to be terrible films based on the box art and list of the cast. Supernatural horror is always a big draw for me and when you put that together with the likes of Christian Slater (“True Romance”) and Vinnie Jones (“X-Men: The Last Stand”), I have a hard time saying no…even though I am sure to regret it. The film itself starts off at a snails pace and never gets it’s feet off the ground. I literally went to turn this film off after about 20 minutes and probably did mentally after that time, thanks God for gaming on my phone to pass the time. Avoid this like the plague.

Official Premise: After a series of inexplicable murders sweeps a small, isolated community, Father Henry (Slater) goes to a local police detective (Jones) with a theory on why the murders are occurring. The two learn that a troubled teen with a dark past has recently moved to town and has set his sights on the cop’s beautiful, young daughter. Father Henry, who turns out to have secrets of his own, finds himself pitted against a demonic force more diabolically evil and twisted than any of them could have imagined.

Christian Slater and Vinnie Jones are not the real stars in the “Way of the Wicked”. They are just poster boys for the film to draw you in. Jones plays the father of one of the kids in the film and Slater plays a priest that pops up in the opening scene and then disappears for a while and then comes around later in the film. The Blu-ray picture and audio are standard, nothing special. There are no special features included on this film at all. This comes absolutely bare bones, just like the film itself.