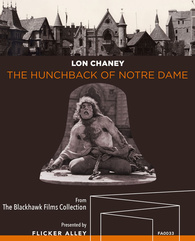 When I see that a film is being released from the company Flicker Alley, I know I have to take closer look. Their most recent venture brings the Lon Cheney Classic, “The Hunchback of Notre Dame (1923)” to Blu-ray for the very first time with this beautiful new restoration. Lon Chaney really embodied the character of Quasimodo and feels like he came right off the pages of original illustrations of Victor Hugo’s novel. When you look back to over 90 years ago, this film had quite the issue during the production, which makes for a great story. The sets at the Universal back lots too up nineteen acres of space and filming took six months to complete. If you are fan of this film, this is a most own.

Official Premise: Gothic drama in which the hideously deformed bell-ringer Quasimodo (Lon Chaney) lives in the bell-towers of Notre Dame Cathedral in Paris. He strikes out viciously at the city folk after their constant taunting, but is saved from their wrath by a beautiful gypsy girl, Esmeralda (Patsy Ruth Miller). When she is accused of stabbing her lover, Quasimodo spirits her away into the bell-tower, but their friendship ends in tragedy.

Now the rest why I love Flicker Alley’s releases is because they really put a lot of work into their releases. This Blu-ray is mastered from a multi-tinted 16mm print struck in 1926 from the original camera negative. In case you are wondering why that is because the original 35mm print did not survive over the years. Since this film is over 90 years old, there is some visible wear in the source material but it was cleaned up as good as it could due to digital restoration. Flicker Alley is claiming that this is the best representation of the film currently available and I definitely agree. Top it off with an amazing new symphonic score arranged by Donald Hunsberger was recorded in the Czech Republic by a full orchestra conducted by Robert Israel and we have a winner.

If you think since they spent all that time on the Blu-ray restoration that there wasn’t going to be any bonus materials you would be wrong. There is an essay and optional audio commentary by Chaney scholar Michael F. Blake. There is rare footage (show in 480i) of Chaney out of makeup on the Cathedral set. “Alas and Alack” is included, which is a 1915 short film in which Chaney plays a hunchback. There are over 100 original production and publicity stills in the Dynamic HD photo gallery. Lastly we get a very high quality digital reproduction of the original souvenir program.