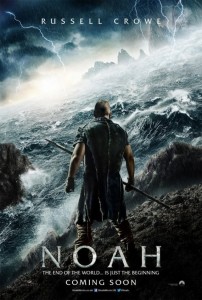 There are going to be three types of people showing up to the cinema to check out the new film “Noah.” First will be people who go to see the big movie-of-the-weekend with the big-name stars. Second will be those people expecting a Biblical tale. Third will be devout fans of filmmaker Darren Aronofsky. I am part of the third group.

I am also a fan of both Russell Crowe and Jennifer Connelly. Crowe first caught my interest in the mid-nineties with the film “Romper Stomper” while Jennifer Connelly was probably every young boy’s crush of the late-80‘s and 1990’s. However, even with their talent and pull, I don’t know if I would have even gone and seen this movie if it weren’t for its director and co-writer, Darren Aronofsky, whose career I’ve been following since his 1998 directorial debut “Pi.” I have been waiting for years for a major studio to give him a large budget and let him unleash the undeniable talent that he has. And, with “Noah,” a studio finally has.

Those in tune with Aronofsky’s style and previous work could easily see this as a tonal prequel to his 2006 film “The Fountain.” There is a similar visual style at work here as well as the concept of the story. Aronofsky co-wrote “The Fountain” with Ari Handel, with whom also co-wrote this film.

“Noah” is an epic tale, with grand landscapes and fantastic visual effects (for the most part). Yet the story relies mainly on the humanization of the Noah character. As we all know the story of Noah, one doesn’t need to rehash it. This story brings Noah into human form and shows that he isn’t all-knowing and miraculous; rather he is shown as flawed and in constant struggle. Crowe does an excellent job at making you fall for his compassion and sincerity. In due time he is also able to make you fear him and root for him to change his mind. This is certainly one of the better performances he has given in years. It’s worth calling to attention that this is the second time that Russell Crowe has performed opposite Jennifer Connelly. They are husband and wife here, just as they were in 2001’s “A Beautiful Mind,” a film that earned them both Academy Award nominations, with Connelly taking home the Oscar for BestSupporting Actress. Here their characters are quite believable and have an obvious chemistry.

They seem to draw great performances out of one another. The same can be said of the team of Aronofsky and Connelly. This is their second film together, after working previously on 2000’s “Requiem for a Dream.” For reasons only known to the filmmakers, for a majority of the film Connelly’s role seemed to be that of turning to the camera and showing awe or concern. I feared she was going to be underused in the film, until the third act when she steps forward and gives one of the most compelling performances of the film. Hopefully another Oscar nomination will come her way next award season.

The final positive I have for this film is the beautiful-yet-haunting score by Clint Mansell. Like the film itself the music blends well with his score for “The Fountain.” It is powerful, operatic, and seems made to be played against the backdrop of Matthew Libatique’s beautiful cinematography.

If there are any negatives here they are small. One is the composition of the visual effects. The effects themselves are fine but they do not blend well with the live-action shots. I blame this mostly on the clarity of digital projection. Film grain, in the past, helped blend the seams a little better. While most of the visual effects shots were epic and powerful, a few were too noticeable and brought me out of the moment. The second negative is the story structure. While the writing itself was fine, it sometimes came across as a little cliché’; you could almost feel some sort of studio influence at hand.

That being said, “Noah” is a film that should be seen on the big screen with the hope that it will be remembered next award season