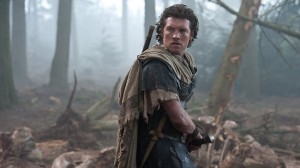 The film picks up many years after the first film ended. Perseus (Worthington), the son of Zeus (Neeson), recently widowed and raising young son Helius (John Bell), is living the quiet life of a fisherman. One night he is visited by his pop who tells him that because so many people have stopped praying to the Gods they are getting weak. If they get any weaker the world as the people know it will be destroyed. The source of that destruction is blamed on the common folk and their lack of prayer. Only after investigating does Zeus find that his brother, Hades (Fiennes), still bitter from the whole “sent to the underworld” thing, has teamed with nephew Ares (Edgar Ramirez) to release Kronus, the king of the underworld and father of Zeus, from where he has been seemingly forever. Kronus’ goal is to retrieve the lightning bolt of Zeus, the triton of Poseidon and the helm of Hades, which when assembled together will allow Kronus to defeat the Titans. Chaos ensues.

Featuring strong performances by Neeson and Fiennes, “Wrath of the Titans” features some brilliant effects (the fire and ash monster that is Kronus) and, though still converted, much better 3D then the last film. Which I’m sure will make Warner Brothers happy after the backlash the studio took from fans due to the horrible 3D conversion they shelled out good money for. The story is pretty much your standard mythological tale…monster threatens town/village/city/world and is eventually defeated by unassuming hero. Of course, the hero here is part man/part God, so he has a slight edge. The story has a more humorous tone as well, when Perseus encounters a trio of Cyclops. And, despite what I’m sure was against Worthington’s wishes (he spoke out very negatively about an appearance in the first film), Bubo the owl makes another appearance here.

I’d also urge you to get in your seats early as preceding the film is an incredible trailer for Peter Jackson’s upcoming “The Hobbit.” Worth an extra rating star all by itself!