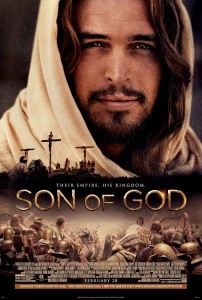 I have to preface this review by stating that I attended Catholic school for four years. During those years I probably learned more about the Christian faith than I have at any other point in my life. No matter what grade, one part of our day was dedicated to a religion class. No, not learning about other religions and expanding our horizons, but instead just going over the same Biblical curriculum. Think of it in the same way they hammer in English and math lessons every year in schools. During religion class, we either read scripture, interpreted scripture or watched a good old fashioned New Testament movie. I watched almost every single kind, ranging from animated, black and white, silent, TV series and ones I’m fairly certain were created just for church distribution. Very few of them distinguished themselves when retelling the story of Jesus. “Son of God” is no different.

With hundreds of pages to go off, where does the movie begin? Well it never feels like it actually starts off anywhere and instead just dabbles throughout the beginnings of Jesus Christ (Morgado). I guess you could say it starts at his birth, but that literally occupies a couple of minutes in the movie. For some reason they try to establish Pontius Pilate (Greg Hicks) early on. He’s clearly a big player later in the story, but showcasing him on horseback while his minions kill people seems rather pointless. The story isn’t really set in stone. We have some random narrative from the Apostle John (Sebastian Knapp) that adds nothing. The first third of the movie is spent meandering from one random story to the next and surprisingly Christ’s baptism was not one of those stories. We reach some consistency when Jesus makes his final entry into Jerusalem before his crucifixion. I feel like most movies on the life of Christ hinge their emotional bets on the crucifixion. “Son of God” does too, but the payoff comes off passionless.

The movie oddly spends half it’s time dipping into the behind the scenes politics of the Romans and the Jewish elders bickering about Jesus. It saps previous screentime that could have been used to build the relationship Jesus had with the Virgin Mary (Downey) or his Apostles. The movie heavily focuses on the people who seem to lack faith in Christ’s abilities. Everyone from bystanders to his Apostles are constantly second guessing his claims and his miracles. As for the actors, they’re convincing enough in their roles, but nothing screams job security. Playing the Lord and Savior for over a billion people is a tough task, but Diogo Morgado is a bit underwhelming. He smiles some pearly whites when delivering a sermon, but Jesus wasn’t all niceties and politeness. One of the most pivotal stories of the New Testament is when Jesus becomes physically upset that the temple in Jerusalem has become a den of thieves and crooks who peddle their goods. This movie should call for Jesus to become physically upset (the only time it happens in the Bible), but instead becomes an obvious sign that Morgado may not have been the right man for the role.

This isn’t a bad movie, but it’s not a good movie either. This movie suffers from being way too vanilla with its material. It seems afraid to try anything new in terms of story telling. I had to ask myself after the movie: Why must a movie like this be made if there’s nothing creatively new to add? I know the immediate response would be to spread the word of God for a new generation. But I don’t think that’s a real reason if this movie is simply a cut and paste theatrical release of “The Bible” miniseries that was aired on the History Channel. Maybe I’m wrong. All I know is, future Catholic school kids will be stuck watching this when teacher feels like letting the TV do the lecturing.