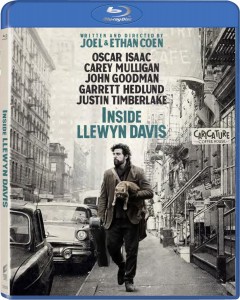 Whenever I see the Coen Brothers are coming out with a new film my interest always peak. When I read that “Inside Llewyn Davis” was going to be based around the work of folk music, it quickly made my most anticipated movie list. I do not really feel that this film got the attention that it deserved. Oscar Isaac delivered some an amazing performance, I literally had trouble taking my eyes off the screen. There was something about this film that kept my interested the entire 104 minutes. The music was amazing and all sung by each of the respective actors. Along with Isacc performance, there are some fantastic supporting roles delivered by Carey Mulligan, John Goodman, Garrett Hedlund and Justin Timberlake. Each was like a perfectly executed cameo, especially Goodman. If you are a fan of the Coen Brothers’ films, I highly recommend this since it is probably not for everyone.

Official Premise: “Inside Llewyn Davis” follows a week in the life of a young folk singer as he navigates the Greenwich Village folk scene of 1961. Llewyn Davis (Oscar Isaac) is at a crossroads. Guitar in tow, huddled against the unforgiving New York winter, he is struggling to make it as a musician against seemingly insurmountable obstacles – some of them of his own making. Living at the mercy of both friends and strangers, scaring up what work he can find, Llewyn’s misadventures take him from the baskethouses of the Village to an empty Chicago club – on an odyssey to audition for a music mogul – and back again.

Sony delivered “Inside Llewyn Davis” on Blu-ray along with an HD Digital Ultraviolet copy. The 1080p really captures that 1960’s New York feel to it. It looks gritty yet very sharp at the same time. The music performed by Oscar Isaac, Justin Timberlake and Carey Mulligan, as well as Marcus Mumford and Punch Brothers sounds absolutely amazing with the Blu-ray’s DTS-HD Master Audio 5.1 track. This is the Coen Brothers’ fourth collaboration with multiple-Grammy and Academy Award-winning music producer T-Bone Burnett and it was a great decision. There is only one special feature included but it is quite impressive, though I would have loved to seen a commentary track also. “Inside Inside Llewyn Davis” is an in-depth 40-minute, making-of documentary with interviews from the filmmakers, cast, crew and musicians involved with the film.