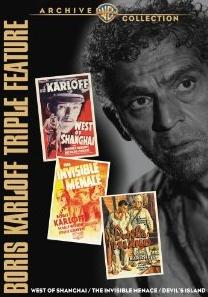 When you think about classic horror, you think about Boris Karloff, who is an icon of his time.  In this three-film collection it shows three different roles from his films at Warner Bros including playing a warlord, a murder suspect and a prison inmate.  The films included are “West of Shanghai (1937)”, “The Invisible Menace (1938)” and “Devil’s Island (1939)”.  These aren’t the best films of his career but they are fun roles nonetheless.  These are available for the film time on DVD, thanks to Warner Archive.  If you are a fan of Karloff, then you will certainly appreciate being able to now own these films all on one DVD.

When it comes to quality Warner Archive tries to deliver decent content with what is available. These films have not been remastered or restored but have been manufactured from the best-quality video master currently available.  The films look decent overall but have quite a bit of age showing. They are each presented in 4 X 3 full frame and with their original aspect ratio of 1.37:1.  The audio track is a standard Dolby Mono track but I felt there was a bit of an issue with some of the dialogue, specifically with “The Invisible Menace”, otherwise they worked well. My personal favorite is “West of Shanghai (1937)”, since it delivers some great make-up work for Karloff’s character, especially for the time.

SYNOPSIS: A cinematic icon, Boris Karloff was one of Hollywood’s greatest actors. Although synonymous with horror, Karloff excelled in other genres as well, providing a lasting legacy of memorable performances. And in this collection of three rarely seen gems drawn from his work at Warner Bros., Karloff shines in a wide range of roles, encompassing mystery, adventure and drama. West of Shanghai (1937): A wily warlord (Karloff) holds a small group of Americans prisoner in a northern China mission. The Invisible Menace (1938): Army intelligence suspects an ex-con (Karloff) of murdering the ordnance expert who framed him. Devil’s Island (1939): A French doctor (Karloff) wrongfully convicted of treason falls victim to the barbaric cruelties of the penal colony’s commandant.

Own it today on DVD http://bit.ly/BuyKarloffTriple