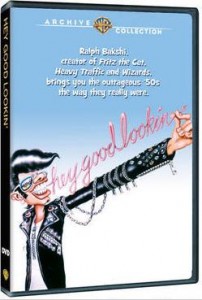 “Hey Good Lookin'” is written, produced and directed by one of my favorites Ralph Bakshi, who is the man behind film’s like “Fritz The Cat”, “Wizards” and “American Pop”. There is a lot of back story behind the production of “Hey Good Lookin'”. The film was originally shot and delivered back in 1974 as a live-action/animated combination, eight years before it was finally released in 1982. Originally only the main characters were animated and the rest were portrayed by live actors. The final version of the film is quite different with most of the live-action sequences taking out with animated scenes replacing them. The original version remains unreleased and will probably never see the light of day. Either way I love Bakshi’s style of animated and this film is no different.  I love the 50’s setting and the animation still holds up well after over 30 years. Don’t miss this release!

Offical Premise: From Cool World creator Ralph Bakshi, Hey Good Lookin’ is an outrageous, nostalgic and adult take on a more innocent time. Well, not that much more innocent: not every street corner was a Happy Days setting. Our hero, Vinnie, leader of the ragtag gang known as the Brooklyn Stompers, plays it cool. His lady, Roz, thinks he’s the most wonderful thing on two legs. And his off-the-wall, hot-wired friend Crazy Shapiro would die for the honor of Vinnie and the gang. They’re all sympathetic and familiar characters turned loose in a funky, surreal cartoon landscape that really packs a punch, just as the ‘50s-styled soundtrack of original songs by John Madara and Ric Sandler evokes playful memories. With Fritz the Cat, Heavy Traffic and Cool World, Bakshi made animation history mixing mature themes and hip humor. If you know his work, then Hey Good Lookin’ is up your alley.

This film is released for the first time on DVD, thanks to Warner Archive.  It is only available via Warner Archive on a made to order basis.  The transfer of the film looks quite amazing on DVD with an sweet widescreen 1.85:1 aspect ratio. The animation really looks sharp and the line detail is well presented and restored. The colors are very sharp and pop off the screen.  The audio track included is a Dolby Digital Mono track and works well with the dialogue and the film’s music. I would have loved to seen Warner Archive give this film the Blu-ray treatment like they have been doing with some of their releases. But at least this film finally gets a decent DVD release and a chance to get the attention it well-deserves. Lastly, besides a trailer, there are no additional extras or special features included.