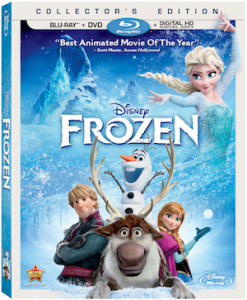 The film “Frozen” has become quite the phenomenon over the last few months. Before this film came out, I would go to Target and there was an entire aisle set out for this film. I knew then this was going to be huge but no idea how big it would have become though. The film recently grossed a billion dollars worldwide at the box office and has inspired many fans. It also just won Best Animated Movie and Best Song at this year’s Oscars. No question, this is the best film of 2013 and quite possible one of the best films from Disney in a long time. Eat it Pixar!

Disney not only gives us one but two new princesses in this film. Very smart on the marketing side, Kristen Bell (“Veronica Mars”) is absolutely amazing as Anna and really embodies the role. Plus she can really sing so well! Idina Menzel (Broadway’s “Wicked” and “Rent”) is also perfect as Elsa. Her song “Let it Go” has really inspired the world. Jonathan Groff (Broadway’s “Spring Awakening”) is definitely the honest goods as Kristoff. Santino Fontana (“Billy Elliot: The Musical”) plays a baddie you love (including my daughter) as Hans. The stealer of the show has to go to Josh Gad (Broadway’s “The Book of Mormon”) who gives live to the lovable snowman Olaf. There is a real Broadway feel to this film with the cast and it works so well.

Official Premise: Fearless optimist Anna sets off on an epic journey — teaming up with rugged mountain man Kristoff and his loyal reindeer Sven — to find her sister Elsa, whose icy powers have trapped the kingdom of Arendelle in eternal winter. Encountering Everest-like conditions, mystical trolls and a hilarious snowman named Olaf, Anna and Kristoff battle the elements in a race to save the kingdom.

Disney released “Frozen” in this Collector’s edition Blu-ray combo pack with a Blu-ray, DVD and Digital HD copy. I have a real major problem with Disney leaving out the 3D Blu-ray option for this film. I thought the 3D really worked so well for this movie and I am really disappointed that it is not available. Come on Disney! If you want it the only option to buy the UK version of get it digitally. The 1080p transfer is still absolutely perfect and stunning. The animation is this film is so amazing and breathtaking. Same goes for the DTS-HD Master Audio 7.1 track, which is also flawless and really works so well with these amazing instant classic songs.

In terms of special features, they are definitely fun and worth checking out but I was really hoping for more. “The Making Of Frozen” is really fun and totally not what I was expecting (in a good way)…watch to see. “D’frosted: Disney’s Journey From Hans Christian Andersen to Frozen” takes us through the process of this film getting made. “Breaking The Ice- The Real Making Of Frozen” gives into the behind-the-scenes…for real this time. There are four Deleted Scenes with introductions by Directors Chris Buck and Jennifer Lee. There is the original theatrical short – “Get A Horse” (but not in 3D). Lastly there is music videos for “Let It Go” by Demi Lovato, Martina Stoessel & Marsha Milan Londoh and a teaser trailer included for the film.

One Reply to “Blu-ray Review “Frozen””