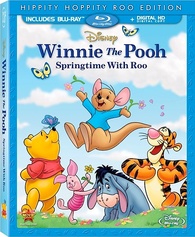 “Winnie the Pooh: Springtime with Roo” is a 2004 direct-to-video film, which features voice actors Jim Cummings as Winnie the Pooh and Tigger, Peter Cullen as Eeyore, and John Fiedler as Piglet. I have always loved this film but I have always been disturbed that the focus of the film is really on Rabbit, who is missing from the cover. It has “A Christmas Carol” theme but set with an Easter background. It is cute and packs tons of great songs. My 21 month old has already watched this quite since we received and she was dancing all around the house.

Synopsis: Each year, Rabbit plays Easter Bunny, but this year, he’s decided it’s “Spring Cleaning Day,” and he orders everyone to hop to it: scrubbing, dusting, and mopping. All his pals are disappointed — especially little Roo — until Rabbit learns that putting others first and showing friends how much you care turns every day into a precious gift.

This “Hippity Hoppity Roo Edition” comes with a Blu-ray and Digital HD Digital Copy. There is also a cute Winnie-The-Pooh baby mobile included inside the came. This strike a code because we have a Pooh mobile for my daughter growing up. For a direct-to-video installment from Disney, I was very impressed with the 1080p transfer. I thought the colors looks so vibrant and crisp. I really enjoyed watching it. The DTS-HD Master Audio 5.1 track worked so well with the numerous songs from the film.

Unfortunately, there is only one special features included “Get Up and Dance”, which gets kid to get up and dance to Rabbit’s Easter song. If you look back at the DVD release of this release, there were quite a few extras missing from that. I am not sure why Disney decided to leave those out. I hope that they are planning on releasing a double feature next with “Pooh’s Heffalump Movie” and its sequel “Pooh’s Heffalump Halloween Movie”. I would love to see these next perhaps in the Fall. Hint, hint!