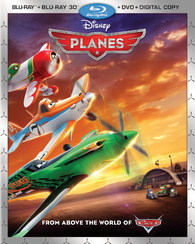 “Planes” is the first theatrically film for DisneyToon Studios since 2005’s “Pooh’s Heffalump Movie”. In fact, this film was originally supposed to come out on Blu-ray but was decided to head into theaters to take advantage of the fact that it was a spin-off from Pixar’s “Cars” series. The film includes the voice talents of Dane Cook, Stacy Keach, Priyanka Chopra, Cedric the Entertainer, Julia Louis-Dreyfus and John Cleese. This is the first film in a now planned “Planes” trilogy. It’s sequel, titled “Planes: Fire & Rescue” is arelady scheduled for theatrical release on July 18, 2014. So Disney made a smart move here and expect a lot from this series. The film was a ton of fun, action packed and super funny. Plus my 17 month old daughter is obsessed with planes and was totally digging this film, I might be to get another copy since this one will be worn out by the end of the year.

Official Premise: The world of Cars takes flight in Planes, an animated comedy revved up with action and adventure. Join Dusty (Cook), a crop duster with sky-high dreams and a once-in-a-lifetime chance to take on the world’s fastest flyers in the greatest air race ever. Dusty has a huge heart but two big problems: he’s not exactly built for speed, and he’s afraid of heights. His courage is put to the ultimate test, though, as this unlikely hero aims higher than he ever imagined. With a little help from his friends, Dusty finds the courage to be more than he was built for, and the inspiration to soar.

Disney delivered this film in a fantastic three-disc combo pack with a 3D Blu-ray + Blu-ray + DVD and Digital Copy. “Planes” looks amazing with its 1080p transfer. I have no idea how this film was heading direct-to-video since it is so epic and really looks amazing. The colors really pop off the TV, especially with the 3D transfer. In fact, I really enjoyed the 3D in this film. With the planes flying right at you, it features a great in-your-face moments and adds some great depth.  The DTS-HD Master Audio 7.1 surround track is also quite impressive. From every propeller to the planes soaring through the skies, the track is so impressive.

The special features are ok but nothing special at all for this film but I would have loved to see a commentary track. There is an Exclusive Franz’s Song, which was produced exclusively for Blu-ray and is a never-before-seen completely finished animated song features the German mini-car, Franz Fliegenhosen. “Klay’s Flight Plan” features Klay Hall chatting about his journey to bringing this film to life. There are two deleted scenes including introductions from Director Klay Hall and Producer Traci Balthazor-Flynn. “Top 10 Flyers” features ESPN’s Colin Cowherd counting down of the greatest aviators in history. Lastly “Meet the Racers” includes featurettes on the following racers El Chupacabra, Ripslinger, Dusty and Ishani.