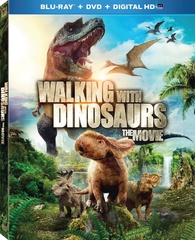 Originally, when I first saw this announced that this was going to be pretty cool having a live-action CGI feature about the 1999 BBC series and live tour. The film packs a great ensemble of talent including: John Leguizamo (“Ice Age” series), Justin Long (“Alvin and the Chipmunks” series) and Karl Urban (“Star Trek” series). Unfortunately, the film just doesn’t really work at all. Visually, its pretty freaking awesome but other that that I had trouble even finishing this one. Plus the dinosaurs mouths don’t move, so these voices end up coming out of nowhere…where dinosaurs able to talk telepathically? I would steer pretty clear for this one unless your kids are huge dinosaur buffs.

Official Premise: The gigantic voice talents of Justin Long (Alvin and the Chipmunks franchise) and John Leguizamo (Ice Age franchise) take you on a thrilling prehistoric journey the whole family will enjoy! In a time when dinosaurs rule the Earth, the smallest of the pack — a playful Pachyrhinosaurus named Patchi — embarks on the biggest adventure of his life. As he tries to find his place in a spectacular world filled with fun-loving friends and a few dangerous foes, Patchi will discover the courage he needs to become the leader of the herd…and a hero for the ages.

Fox delivered this film in a combo pack including a Blu-ray + DVD + Digital HD UltraViolet copy. I personally am a little disappointed since this film was filmed with the latest in cutting edge 3D technology from the masters behind “Avatar”. So I am sure that would have made the viewing experience a little better but still not perfect. Also the Deluxe Edition release contains an extra called the Cretaceous Cut, which is the movie in its “natural” version aka without the voices coming out of non-moving mouths. Nonetheless, the 1080p transfer is still very impressive and the CG animation does look quite stunning. The DTS-HD Master Audio 5.1 track also works with the occasional action.

I am kind of conflicted about the special features here because, they lack any technical approach but they very educational and interactive for kids. Having a young daughter, I actually appreciate that even though I also wanted to see some a visual effects featurette personally. “The Ultimate Dino Guide” urges you to dive into and find out about greatest secrets about your favorite dinosaurs. “Match the Call” is a matching game which has you testing your skill on how the dinosaurs communicated. “Interactive Map” takes you on a tour on where the dinos roamed in comparison to today. Lastly “Brainosaur Trivia Track” is a pop-up track during the film giving fun and interesting facts.