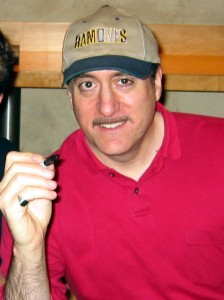 Monte A. Melnick worked with the legendary band The Ramones since the group’s inception in 1974 and served as the group’s tour manager up until the bands last show in 1996. Monte’s book “On the Road with The Ramones” which was co-wrote with Kevin Meyer and released in 2007 garnered rave reviews and has gone on to be released in several other languages. Media Mikes had the chance to speak with Monte recently about his time with the band, the success of his book and the upcoming 40th anniversary of the Ramones formation.

Adam Lawton: How did you initially start working with the Ramones?
Monte A. Melnick: I grew up with Tommy Ramone and we went to school together. We had also played in bands with one another along with setting up studios with each other. I was there at the very beginning when Tommy first got involved with the Ramones and that’s really how I became involved with them as well.

AL: Were you still looking to be in a band at this time or were you looking to move more towards the management side of the business?
MM: By this time Tommy and I had already built Performance Studios and we were also managing it. While doing all of that we still had time for our own bands and my band Thirty Days Out put out two records on Reprise Records in 1971 and 1972. Tommy had his own stuff going on at the same time as well but he was mostly doing engineering. When it started Tommy was really only looking to produce the Ramones however after a couple showcases they couldn’t find a drummer and Tommy ended up becoming the drummer. Eventually the studio had to close down because of noise problems and the Ramones started to get jobs here and there and they asked me to go along with them. Sometimes when there’s a fork in the road you just have to take it and that’s how I transitioned.

AL: What was your first impression of the Ramones?
MM: When I first saw them I was playing in bands that did three part harmonies and had already done some album work myself. At the beginning the band was incredibly raw. I didn’t like them.  They had to develop and grow which took them awhile. That wasn’t my kind of music to start with but working with them and watching them develop I got used to it and they grew on me.

AL: What was it like dealing with Johnny and some of the 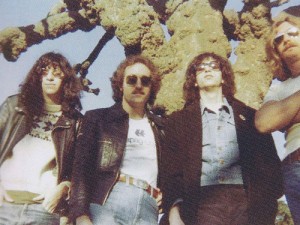 other stronger personalities in the group on a daily basis?
MM: John was a difficult personality however he kept everyone in line and was very good at that. John had a very good business sense. We weren’t really friends but we were co-workers. I was more friends with Joey and the other guys as John kept to himself around me. Its part of the tour manager’s job to be able to not only handle the personalities of the band but also those of the crew as well. The tour manager has double the people he has to account for. That was a big part of the reason I wrote the book was to show both sides of what I was dealing with on a daily basis.

AL: Did you notice a big shift in the band with the addition of members like Marky, CJ and Richie?
MM: Most of the changes that happened were very good. There have been eight different Ramones but basically the members dealt with the changes and tried integrating the new members as best as possible. Guys like CJ filled some remarkably big shoes helped elevate the band to the next level. Richie was another guy that was a great addition to the band as he wrote songs and sang. It was terrific. Sadly he left on a bad note which I have the whole story about that in my book.

AL: How did the idea for your book “On the Road with the Ramones” initially come about?
MM: People kept coming to me and telling me to write a book. I’m not a writer so I didn’t think there was any way I was going to do something like this. Joey had released a solo album on Sanctuary records and at the time they were doing publishing as well. They dragged me in to this thing and gave me a ghost writer by the name of Frank Meyer. Frank was a huge fan of the band and is a great writer so when he came in things just fell in to place and I ended up giving him a co-writing credit because he did such a great job. When we started I didn’t know how things were going to turn out. I submitted around 250 images for the book and they all made it in which is very rare for a biography. I have a room full of stuff and they let me put in all of this stuff. The book had a great art director so when you look at the pages everything just flows together. I am very happy how it turned out.

AL: Do you have plans to release another update anytime soon for your book?
MM: I have done one update already so fans who haven’t got the book yet will want to make sure they get the updated version as it has everything in there. Lately I have been focusing on releasing the book in different languages. We are currently working on our 7th language right now which is going to be in Italian. It’s great to be able to spread the book out around the whole world. 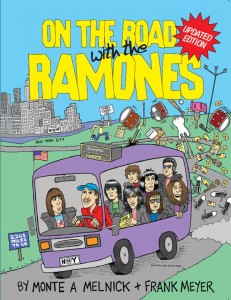 AL: With a lot of the recent commercialization of the band do you feel they would still be around today recording and touring had Dee Dee, Johnny and Joey not passed away?
MM: I think it’s great that stuff like the t-shirts and what not is available. The Ramones were never against commercialization which is why they tried so many different producers. They wanted to make money. The band just tried so hard to make it through out their career. After Joey’s death, the group’s induction into the Rock and Roll Hall of Fame in 2002 and then Johnny and Dee Dee’s deaths the Ramones have become bigger than ever. If the Ramones were this big when I was working with them I would have gotten a raise. (Laughs) They are iconic and it’s a shame that they all can’t see this.  I think if they were all around and in good health they still would be playing. They probably would have played passed 1996 just how far though I don’t know. Joey was not in the greatest of health at the time they decided to call it quits and Johnny figured if Joey wasn’t going to be in good health then he would quit also while he was ahead. They had tons of offers to keep the band going.

AL: Looking back on the bands 40 years of existence/history what is your fondest memory and have there been any talks of a 40th anniversary celebration?
MM: That’s another reason I wrote the book was to tell all of those fond and not so fond memories. There was a lot of stuff going on during 22 years on the road. I loved traveling and seeing the world. After awhile the band got big enough to where traveling became comfortable because in the beginning it was not always the easiest. I miss being out there and experiencing all of the different cultures. As for celebrations I haven’t heard of anything yet. Joey’s brother Mickey has his Birthday Bashes in New York and Linda, Johnny’s wife has her thing in Los Angeles at The Hollywood Forever Cemetery where Dee Dee is buried and they have the statue of John. I am not sure what else they could really do.