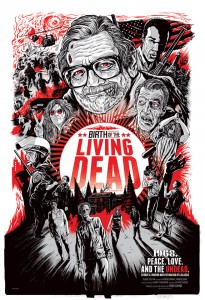 “The Walking Dead” is one of the hottest shows on TV right now. It is a world wide phenomenon. But this zombie madness all started back in 1968 with George A. Romero’s “Night of the Living Dead”. Originally when I heard about “Birth of the Living Dead”, I thought “another documentary?” but I was really pleasantly surprised. The documentary is smart, sharp and very informative. There are a very small list of interviews included, which I feel works for this film because it keeps Romero front and center, as he should be. Highly recommended for any horror fan!

Official Premise: In 1968 a young college drop-out named George A. Romero directed Night of the Living Dead, a low budget horror film that shocked the world, became an icon of the counterculture, and spawned a zombie industry worth billions of dollars that continues to this day. Birth of the Living Dead shows how Romero gathered an unlikely team of Pittsburghers policemen, iron workers, teachers, ad-men, housewives and a roller-rink owner to shoot a revolutionary guerrilla style film that went on to become a cinematic landmark, offering a profound insight into how our society worked in a singular time in American history.

This film delivers some impressive special features. There is an extended interview with George A. Romero, which runs just over 30 minutes. I liked listening to his stories and they interview is quite interesting. There is an audio only extra called “George A. Romero at the Museum of Modern Art, June 16, 1970”, which runs about 10 minutes. Lastly there is also a feature “Bill Hinzman and the World Record-Breaking Monroeville Zombie Walk”, which is worth the price of the DVD only.