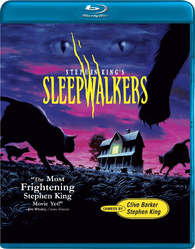 When you hear Mick Garris and Stephen King in the same sentence, it is very hard to be let down. After directing this film, Mick Garris went on to become Stephen King’s go-to director helming adaptations of “The Stand” (1994), “The Shining” (1997), “Quicksilver Highway” (1997), “Riding the Bullet” (2004), “Desperation” (2006) and “Bag of Bones” (2011). In my eyes he cannot and has not failed yet. “Sleepwalkers” was also the first Stephen King film that wasn’t based on a previously published book.

This film was released in 1992 and let’s just say it definitely shows its age. Luckily, the effects in the film are still sharp and overall entertaining. “Sleepwalkers” was also one of the first movie to use CGI in order to create a morphing effect for the creatures faces. The effects were created by Apogeeus, which at the time was ground-breaking. If you are looking for cameos, this film has more cameos than an Adam Sandler film. Besides the two listed on the cover, Stephen King and Clive Barker, there is also brief appearances from John Landis, Joe Dante, Tobe Hooper and even Mark Hamill. Horror fans will have a blast picking them all out!

Since this film is 20 years old, Image still delivers a very impressive Blu-ray presentation (mostly). The 1080p looks sharp and helps this film not show its age too much. The audio listed on the case specifies a 5.1 track but instead we get its original track in DTS-HD MA 2.0. Luckily though, it sounds damn good as well, especially with the film’s score and music. Lastly if you are looking for vast extras, you will only find a standard definition trailer included. I would overall recommend for all fans of horror and King’s work.