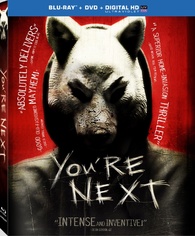 When I first saw “You’re Next”, I expect a full out horror film but I was blown away but what we got. The film is a part revenge thriller, comedy and full out gore fest. Overall, this film is a real blast to watch and will have you cheering. I love Sharni Vinson and she is just so bad-ass in this film. If it does nothing for you it will still have you whistling along to 1977’s “Looking for the Magic” by the Dwight Twilley Band days after watching it. I even have two of the animal masks from the film sitting above my office desk and it drives my poor wife crazy, so I know right there that that aspect was very effective for this film. Director Adam Wingard is a fantastic up-and-coming and he is going to be doing some great things for the genre.  A must watch for any horror fan and I wish they made more films like this.

Official Premise: Aubrey and Paul Davison decide to celebrate their wedding anniversary by inviting their four children and their significant others to a family reunion at their remote weekend estate. But the family reunion goes awry when their home comes under siege by a mask-wearing team of crossbow-bearing assailants. The family has no idea who’s attacking them, why they’re under attack or if the attackers are inside or outside the cavernous, creaking house. All they know for certain is that nobody is safe.

I was surprised at first that there was no unrated or extended cut of this film. It always seems that films like this come unrated on Blu-ray, but to be honest I was also kinda happen that they didn’t need to take that route to draw more people in. Lions Gate delivered this film as a combo pack with Blu-ray + DVD + UltraViolet Digital Copy included. The 1080p transfer holds that polished feel but also hangs on to the 80’s feel that I loved for this film. The DTS-HD Master Audio 5.1 track also rocked with the suspense and fantastic creepy as well score. This really works well to give this film a complete package.

“You’re Next” delivered some decent special features. The main deal here is “No Ordinary Home Invasion: The Making Of You’re Next”, which is a solid behind-the-scenes featurette on the film with cast and crew weighing in about their experiences. These only other features are two audio commentary tracks, but they really enhance the experience of the film and are highly recommended. The first audio commentary track is with Director Adam Wingard, Writer Simon Barrett and Actors Sharni Vinson and Barbara Crampton. This one is really a blast and it gives some great insight in the production. The next audio commentary track is a solo one with Director Adam Wingard and Writer Simon Barrett, it is a little more technical but still recommend if you enjoyed the film. These both make for a great repeat viewing.