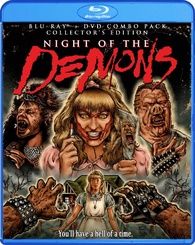 When I was a kid, I used to rent from the video store called Royal Video (now long gone) in Long Island, NY. I remember they used to have a huge standee advertising this film and probably drew me into watching this film way too young. Amelia Kinkade was so great in the role of Angela. One of my favorite Screen Queens, Linnea Quigley, steals the show. This film is a perfect example of a great 1980’s splatter-fest. It has what every a guy would want in a horror movie. If you grew up with this film as I have, I highly recommend this. Hopefully Shout! is planning on releasing the two sequels on Blu-ray as well. They can keep the terrible remake though 😉

Official Premise: It’s Halloween night and Angela is throwing a party, but this is no ordinary spook bash. Everybody’s headed to Hull House, a deserted funeral home with a shocking secret in its past and something evil alive in its basement. Now the guests are becoming possessed, and this party’s treats include tongue-ripping, eyeball gouging, gratuitous nudity, bloody dismemberment and more. Welcome to the blowout where all Hell is breaking loose: You’re invited to Night Of The Demons.

This film flies onto Blu-ray with a fantastic Blu-ray transfer. I feel that the film has never looked better. I remember viewing this on VHS and if I only could have see it this way because it looks great. The DTS-HD Master Audio track also works so well with the film’s music and the scares as well. This Blu-ray/DVD combo pack comes with a great new cover art and also the classic poster artwork as well on the reserve side.

In terms of special features, there are a few great brand new extras created for this release. There is a new commentary track with Director Kevin Tenney and actors Cathy Podewell, Hal Havins, Billy Gallo and FX artist Steve Johnson. This one is a blast and great way to revisit this film. There is also another audio commentary track with Director Kevin Tenney, Executive Producer Walter Josten and Producer Jeff Geoffray. There are also new interviews with cast and crews including director Kevin Tenney, riter/producer Joe Augustyn and actress Linnea Quigley. Lastly there is a Promo Reel, trailers, TV spots and still galleries included.